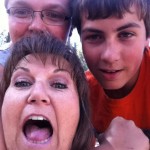 2 Responses to We Are Soooooo Done Here!!