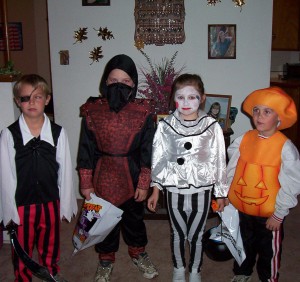 Halloween is here, and all the kids will be out tonight dressed up as whatever their imaginations can come up with. I personally like the cute costumes better than the scary or evil ones. I always have. I was never into horror movies, and I don’t like scary things, so it just stands to reason that I like the cute costumes.

My grandchildren have outgrown…for the most part…the trick or treating part of Halloween, but during their time they have been everything from a pea pod as a baby to a pirate, because it’s not wimpy. Probably my favorite for Chris was the Lion King, for Shai was the Lady Bug, for Josh was Spiderman, and for Caalab was the Pirate. They have been so many things that is really is hard to decide and of course, the years all run together and unless you are looking at the pictures, you may not recall.

One of the cutest costumes I saw that was not my own grandchild, was last year when we had the cutest little pink Lego Block come to our house. She was about 3, and just precious. I had to ask her parents for permission to get her picture. I won’t show it here, because that is not my right, but take my word for it, she was a cutie and her mom had done an excellent job on her costume.

I like talking to the cute little ones and asking who they are…not who they really are, but who they are pretending to be, because sometimes you can’t tell, and sometimes they have an entirely different idea of who they are from what their costume says they are. Halloween can be a fun time for kids to play a little make believe. I hope everyone has a great time this year. As for me…we are going bowling.