The Fight For Height 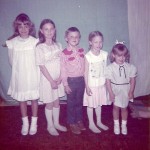 When children are little they normally follow their age, or close to it as to the range of heights, but in some cases where you have some very tall parents and some very short parents, that isn’t always the case. In our family, we have some tall people, such as Lynn, my brother-in-law, who is 6’6″ and then you have Debbie, my sister-in-law, and me, who are both 5’2″. So, this makes for a wide variety of heights in our kids.

Corrie, my daughter and the first born grandchild, is my tallest child at a whopping 5’1″, even shorter than I am, but not unusual considering that much of my family is short and some are shorter than I am. Then comes my second daughter Amy, the second born grandchild and the one who gets to have the distinction of being the runt of the litter as the family goes, comes in at 4’11”, or midget as her husband Travis likes to call her. Machelle, my niece and Debbie and Lynn’s oldest daughter and the third born grandchild, and her sister Susan, who is the youngest of this group, come in at 5’10” and 5’10 1/2″ respectively. And Barry, fell right in line with Machelle and Susan at 5’10”, just a little shorter than Susan, but with the right shoes, who would ever know. There are two other grandchildren, JD and Eric, who were born a while after the first photo was taken, and weren’t in the second for some reason. So I guess that we are really just a wide spread in there, and not anything like stairsteps…since my girls are just little, and the rest of the kids are just tall.

There is an age distinction that will always come into play where kids and grandkids are concerned, but it becomes very hard to 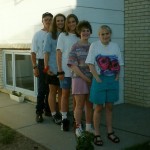 tell as kids get older, because you just never know how things will play out in the height arena as they grow up. It is always interesting to watch them try to stand up tall…even on tip toe to remain the tallest for as long as possible, but in some cases, that doesn’t hold out for very long. Amy was fairly quickly relegated to the basement in the height arena, and initially Machelle raced out front, even though they are only 6 months apart in age. Corrie got pushed down to second to the bottom in the height race early on too, and there they have both remained from that time forward. So other than the years when JD and Eric were little, Corrie and Amy have always been the runts. The real fight for height has been with the rest of the kids. You guys should really just learn to get along…Hahahaha!!!