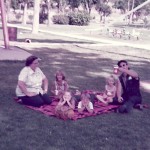 When my girls were little, my sister-in-law and brother-in-law lived in Thermopolis. Their daughters, Machelle and Susan, and our daughters, Corrie and Amy, were friends, as well as cousins. It became a summer tradition to let the girls spend a couple of weeks together. Often we would make it a family day when we took our girls to Thermopolis for their cousin time trip. My mother and father-in-law often went along, so they could see their daughter, son-in-law and granddaughters. We would make it a family day, with a picnic in the park at Thermopolis, before we would head back home.

It was always odd to get back home to a house void of children, and know that they would be gone at least a week. Sure, we didn’t need a babysitter if we wanted to go out, but I still missed my girls. I suppose that was normal for a mom. Meanwhile my girls were having a great time.

I’m quite sure there were fights, because…well, that’s what kids do, but when you put 4 girls together, there is a lot of imagination and fun going on too. And of course, when you are in Thermopolis, there is also swimming going on, and what kid doesn’t like that idea. My sister-in-law and brother-in-law had passes to swim as often as their family wanted, so it was a good deal for them and the kids. That was one of the highlights of the time spent there for my girls. Swimming in the warm water of Thermopolis ia a treat for anyone.

The rest of the cousin time was spent with dolls and tea parties, and all the other fun things girls can think of to do, but it wasn’t so much what they were doing that mattered. It was that they were spending time together, staying connected with each other. It was something that was hard as they grew older, but I think that the time spent together when they were little, built a foundation that they have kept strong to this day. They have turned into wonderful women, all of whom I am very proud, and I’m very thankful that we gave them that cousin time when they were little.