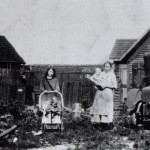 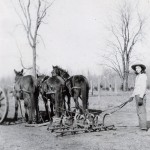 I don’t pretend to know a lot of the details of my dad’s young life. I do know that the times weren’t always easy, and since my grandfather, who worked for the railroad, wasn’t around much, the kids helped out around the place. My grandmother was a very strong woman, and she was very capable of running the farm. That may have been how many of the women were back then, but as strong women go, she was right up there at the top, or so I’m told. She trained her children to be hard workers, and responsible people, and they all were. My Uncle Bill and my dad told me about blowing tree stumps out of the fields with dynamite so the land could be worked. I’m sure they didn’t mind that job too much, since dynamite was something the also played around with…like blowing gate posts deeper into the ground, only to have to fix it before their mom got back from town. My guess is that she was about the only thing they were afraid of.

My Aunt Laura was ten years older than my Uncle Bill, who was the second child, so she helped with caring for the little ones so her mom could do the other things she needed to do. I’m quite sure that running a farm would have been very difficult without the help of my Aunt Laura, not to mention lonely in those early years, when the younger children weren’t much company. There were fun times too, of course, such as fishing, which the boys thoroughly enjoyed, but there was always work to be done, and the fun times were squeezed into the middle.

Everyone helped out…the girls as well as the boys. From running a horse drawn plow to a tractor, stacking hay and caring for the animals, it was a team effort. The kids had great respect for their mother and would do anything for her. It was a time that was much different from our own. There weren’t as many conveniences, so the land had to be worked in the old ways…using horses. I don’t think my Aunt Ruth minded that too much because many of the pictures I saw her in included horses. They did have a tractor, although I don’t think it was in the early years, but when they did, it was obvious that my Uncle Bill enjoyed using it very much. The boys always liked machinery…throughout their entire lives. 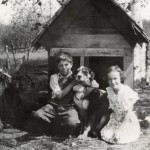 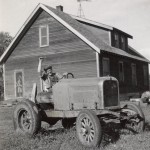 Life on a farm in the late 1920’s and early 1930’s was difficult at its best, and downright ugly at it worst, and it took strong men and women to make things work, but that really is what our country is all about…strong people doing their best to do what is right and good. It is our heritage, and it’s not a bad one. Strong people are what built this country and I believe there are still a lot of us around to continue to make this country great.

4 Responses to A Strong Woman