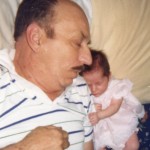 From the moment the were born, my dad’s grandbabies loved to cuddle up with their grandpa and take a little snooze. He just had a way of making them feel safe and warm…not to mention loved. Dad always loved to take a little nap, when his schedule would allow, and so became the logical choice for a nap time babysitter. Those little babies just loved their grandpa so much, that they seemed to actually be reaching out to hold on to him, and it didn’t matter how small they were. These pictures are among those that we wouldn’t trade for all the gold in the world. They are the moments that you can never get back, because babies just don’t stay this little for more than a minute. They are a glimpse of the past that we can’t ever get back. 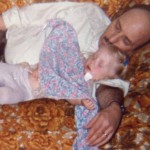 My dad had a way with little kids. They just seemed to gravitate to him. He was a great friend, playmate, and a great snuggler at nap time. It always seemed like at some point during our visits, those babies and little kids would get tired after all the playing, as would my dad, and they would end up on the couch, where both would be sound asleep. When we would notice that things had gotten awfully quiet, we would tiptoe out to the living room fully expecting to find two exhausted playmates, sound asleep on the couch…and that is exactly what we would find. Grandpa and grandchild, often with a blankie or some such bedtime item to cuddle with. These moments were always so cute that they must be captured in a picture that always brings a collective “Awwwwwww!!” comment from those who see them. 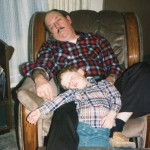 Every so often, we would be treated to one of the cutest pictures, when a grandchild trying to be just like grandpa would so closely follow in grandpa’s footsteps that it was like looking in a mirror. I suppose that originally, Ryan was sitting on grandpa’s lap, but he slowly slid down into the gap between the seat of the chair and the foot rest, to end up looking just like his grandpa, but a little further down in the chair. It would prove to be one of the treasured pictures of grandson wanting to be just like grandpa…and maybe succeeding…just a little. My dad’s grandchildren all loved him so much, and thought so highly of him that they wanted to spend time with him…mimic him…play with him…and mostly love him. And all of them were greatly blessed to have known him.