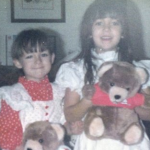 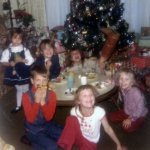 My girls, like most kids had great cousins, but like most kids, there were good days and bad days. This applied to both sides of our family. Their relationships with their cousins have spanned 3 decades and have grown into beautiful friendships, despite the rocky starts.

Since I was the second child, my older sister’s children were the only cousins on that side for a long time. Her older daughters were always a source of goofy antics, while providing my girls with a little bit of a look at how the bigger kids acted, and what they did. Her son gave them a glimpse into what boys were like…quite a culture shock for my girls who were around mostly girls. Her younger girls were really the ones my girls played with, and also, where most of the fights occurred. There were fights of the real and imagined kind. Now many people might not know what an imagined fight is, but I know. It is when one child tells on another child for hitting them, when in reality no such event took place. I expect this type of fight happens more than we know. Thankfully, as time goes by, those same kids who fought like cats and dogs, and then turned right around and played until they dropped from exhaustion, grow up to become wonderful adults, who are the best of friends and the greatest allies for life.

On Bob’s side of the family, things were much the same. Great little friends, but also serious little fighters when they felt like their territory was being invaded. The would play together, quite happily, until someone had a toy or other item…such as the seat of an old tractor that Grandpa had, and the other one wanted. Such invasions of perceived territory, might get one socked in the nose…or even bitten. Because the kids were all so close in age, they each felt like they were the one in charge, and sometimes the only solution was to make them all come in and let them know that…none of them was in charge. We were!! Again, thankfully those years have passed and yet, the relationships survived.

There truly is nothing like family. It doesn’t matter what you agree or disagree on, you always love each other. You are friends forever, because you have grown up with all the 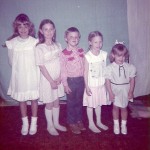 secrets, adventures, and yes, fights that build the lives of children. You have survived the most embarrassing moments, the most horrible looks, and those awful fads that your parents still cringe about.

You are now adults with kids of your own. You have come full circle…and your kids are fighting with their cousins, wearing clothes and hair styles you hate, telling you that you don’t understand anything…basically after all those years of trying to be yourselves, you have become…your parents.