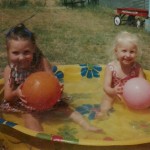 When our children are little, they are so easy to please. A ball and a wading pool made for hours of fun, and at that time, usually cost under $10.00, so they were affordable on any budget. The girls loved playing in the pool on a hot summer day, and I could sit in my chase lounge and read a book. Those were wonderful, lazy summer days.

Of course, in those days, any video games that were available were expensive and primitive. We got one when they were a little older, but unlike the kids today who seem to be born with technology in their hands, the girls used their imaginations. I’m not saying that technology is a bad thing, since I’m a big techy too, just that it wasn’t as easy to come by back then.

My girls, like kids today as well, played in boxes, because they could imagine it was a fort or some such thing. They had Cabbage Patch dolls, and played house. They and their friends played tea party and dress up. They loved playing in a sand box, making little cities or building sand castles.

The technology we have today is amazing. You can look up on the internet whatever you can imagine in your mind. The games kids play become more and more graphic. Murder and crime don’t phase our kids anymore, because they have seen it all on a game. Sometimes we can’t even relate to a tragic event, because it looks so much like the fantacy world we have watched on television. I sometimes wonder if the criminals and terrorists get some of their ideas directly from television and video games. I’m not saying that technology is bad, just that it takes away a precious commodity from our kids sometimes…imagination.