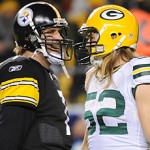 Ah, the Super Bowl. The day when even non-football-fans and those who watch just the occassional game, gather together with the die hard fans, pick a team to support, even if it isn’t the one they would normally go for, stuff their faces with Thanksgiving Day sized feasts made up of mostly snacks, and scream like they know what is going on. Those who really don’t want to watch the game, come to the party anyway, for the food and socializing with the other people who really don’t want to watch the game, and laugh every time a “fight” breaks out over a play.

I used to be in the non-football-fan category, but my Dad always liked the Broncos and my husband and I love to go to Denver, so we became the die hard Bronco fans, that like to kind of know how their team is doing, and watch an occasional game, especially if they have a chance at going to the Super Bowl. But, when it comes to the Super Bowl, it doesn’t matter who is playing, we are watching. That all started one year when the Broncos went to the Super Bowl. I believe it was 1987. And we have not missed a Super Bowl since. We get on the game boards, hoping for a win, which has eluded us so far, but we are, never the less, hopeful for this year. We yell and scream at the refs, and of course when our team get a touchdown, you might not want to be too close, or plugging your ears would also be good, because we will be screaming.

Yes, the Super Bowl brings friends and football enemies together to fight it out for the championship. It is a very unique day in our year…or maybe, just the mid-Winter, un-holiday party opportunity!! And since my team isn’t playing, my daughter loves the Packers, and my grandson loves the Steelers, all I can say is…”Go Broncos!!”