I Will Have Hope 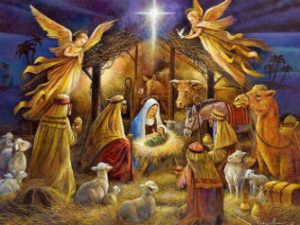 Most of the time, Christmas is a time filled with tradition. Many families celebrate it in exactly the same way every year. Of course, the most important thing about Christmas is the celebration of the birth of Jesus. When I think of where this world would be if Jesus had never come down from Heaven to save us from our own sins, I feel such thankfulness. We needed Him, and He came. No one really knows what day Jesus was born, but in reality, that part doesn’t really matter, but rather the fact that he was born.

This Christmas, for many people has been different than any other Christmas we have had before. Most us us weren’t alive in 1918 when the Spanish Flu Pandemic brought quarantine to many places in the world. I don’t know if things were as locked down as they are this year, but those who were ill, could not be with other people, and so their families were separated, as many are now. It makes for a Christmas that doesn’t feel like Christmas. Still, we have to remember the reason for the season, and not the things we have lost. John 3:16 says, “For God so loved the world, that he gave his only begotten Son, that whosoever believeth in him should not perish, but have everlasting life.” Without Jesus, we were doomed. With Him we have victory and everlasting life. What a wonderful reason to celebrate His birthday. He is the Savior of the World, and His way is so easy for us to follow.

Like it or not, this Christmas brings us to the beginning of the last week of a horrible year, and one the likes of which many of us hope never to go through again. January of 2020 found us facing the beginning of the pandemic, and by March we were in quarantine, and the economy was shut down. The year got steadily worse until many of us found ourselves 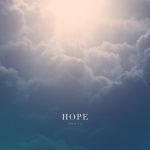 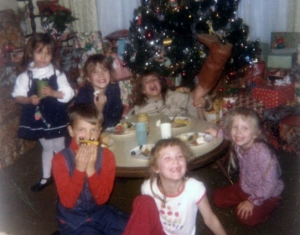 weary, and ready to start a new year. For my family, that has not changed. We are really ready for 2021. Even today was a sad day, but I will tell of that story tomorrow. I believe the new year will be much better, and as bad as 2020 has been, I am very optimistic for the new year, not for any political or human reason, but because I believe that God is good to us and because he sent His son to die for us, He will not leave us without hope. Therefore I will have hope for 2021. Merry Christmas to all!!

The Anti-Mask League of San Francisco 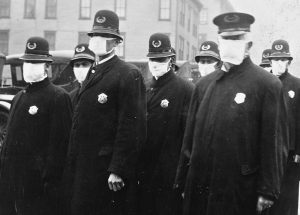 As the Covid-19 Pandemic has spread across our nation, so has the battle for or against the wearing of face masks. Part of the problem has been the conflicting analysis as to the value of the masks between one doctor and another, one politician and another, or even the same doctor at different times during the crisis. Many states, cities, and even establishments have rules about wearing a mask, with varied levels of enforcement. Of course, we were told to “shelter in place” and close any “non-essential” businesses, a catastrophic event for the economy. Everything from schools to bars, and theaters to salons was closed. Cities became virtual ghost towns, and things like Facebook and Twitter, Zoom and Google Classroom, texting and phone calls became vital. People’s sanity began to take a hit, and loneliness became the norm…especially for anyone who lived alone.

It’s been a grim time, but it isn’t the first time. During the 1918 Spanish Flu Pandemic, mask wearing started with the first masks being made out of gauze, which was quite porous. Still, in an effort to stop the spread, or as we would say these days, flatten the curve, all the people were now asked to wear masks. In fact, in the Fall of 1918, it became mandatory. With the second surge in December 1918, new restrictions went into place. The January 1919 ordinance had a much larger impact in creating resistance to wearing a mask in public by American citizens. However, it too was short lived, and on February 1, 1919 the city ordinance requiring every citizen of San Francisco going out in public to wear masks was voted down. The mandatory mask laws for COVID-19 are not new. This has already happened twice in American history and if you do feel strongly about not wearing one, it has been protested successfully before in a pandemic caused by a much deadlier virus.

I don’t believe the resistance, with was called the Anti-Mask League of San Francisco fell along party lines, like 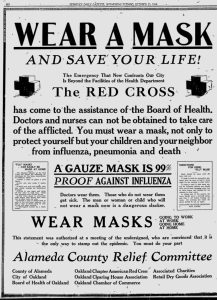 much of today’s resistance seems to be, but were rather a diverse bunch of individuals with varying professional backgrounds. Its members included physicians, libertarians, and many others. Many of the same arguments we have today, were in place then, and it is debatable as to whether or not the masks of today are any better than the ones back then…with the possible exception of the medical grad hazard wear, the N-95 mask, and the Head gear. Pretty much everything we’ve tried with Covic-19 was also used in 1918 to try to prevent the spread of the flu…close schools, wear masks, don’t cough or sneeze in someone’s face, avoid large events and hold them outside when possible, and of course, no spitting. There were many ways to get the word out, like in Philadelphia, where streetcar signs warned “Spit Spreads Death.” In New York City, officials enforced no-spitting ordinances and encouraged residents to cough or sneeze into handkerchiefs (a practice that caught on after the pandemic). The city’s health department even advised people not to kiss “except through a handkerchief,” and wire reports spread the message around the country. I don’t know…does any of this sound familiar to you, because it sure does to me. I guess there really is nothing new under the sun. In western states, some cities even called mask ordinances a patriotic duty. In October 1918, the San Francisco Chronicle ran a public service announcement telling readers that “The man or woman or child who will not wear a mask now is a dangerous slacker.” This was in reference to the type of World War I “slacker” who didn’t help the war effort. One sign in California threatened, “Wear a Mask or Go to Jail.” The PSA in the Chronicle appeared on October 22, just over a week before San Francisco had scheduled its mask ordinance to begin on November 1. It was signed by the mayor, the city’s board of health, the American Red Cross and several other departments and organizations, and it was very clear about its message: “Wear a Mask and Save Your Life!”

“Red Cross headquarters in San Francisco made 5,000 masks available to the public at 11:00am, October 22. By noon it had none,” wrote the late historian Alfred W Crosby in America’s Forgotten Pandemic: The Influenza of 1918. “By noon the next day Red Cross headquarters had dispensed 40,000 masks. By the twenty-sixth 100,000 had been distributed in the city… In addition, San Franciscans were making thousands for themselves.” Lasting from February 1918 to April 1920, the Spanish Flu Pandemic infected 500 million people…about a third 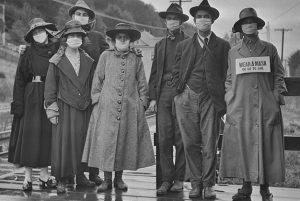 of the world’s population at the time, in four successive waves. The death toll is typically estimated to have been somewhere between 17 million and 50 million, and possibly as high as 100 million, making it one of the deadliest pandemics in human history. With all the safeguards, and the lack of success in “stopping the spread,” I guess it is up to each individual to decide on the effectiveness, or the lack thereof, concerning the safeguards that were put in place. To me, it seems that we have done pretty much the same things today as they did in 1918, so only time will tell us if they were successful, or a waste of time and money. Still, since the Spanish Flue had 4 waves, it doesn’t seem like we successfully stopped anything. 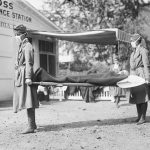 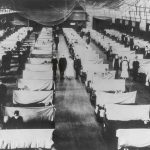 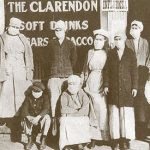 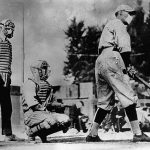