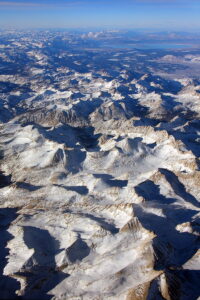 Because I love to hike, I am always interested when I see something about a trail I’ve never been on. I can’t say that I’ve hiked an extensive number of trails, but most trails interest me anyway. Sometimes it’s just the area of the country, and my imagination kicking into high gear.

The Sierra Nevada is a mountain range in the Western United States, located between the Central Valley of California and the Great Basin, with most of it located in the state of California, although the Carson Range spur lies primarily in Nevada. The Sierra Nevada is part of the American Cordillera, an almost continuous chain of mountain ranges that forms the western “backbone” of the Americas. There are literally miles and miles of trails leading to such famous places as Yosemite Valley, King’s Canyon, and Sequoia. Yosemite is the most famous one, and probably the one I would most like to hike. Pictures of the falls often grace the internet as people love the challenge of the hike to Yosemite Falls.

The Sierra Nevada runs 400 miles north-south and approximately 70 miles east–west. Besides the mountain tops, waterfalls, trails, and rivers, the area also boasts the largest tree in the world by volume, known as 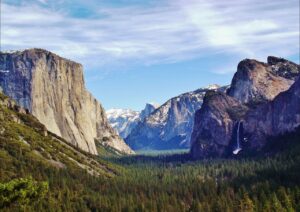 General Sherman; Lake Tahoe, the largest alpine lake in North America; Mount Whitney at 14,505 feet the highest point in the contiguous United States; and of course, Yosemite Valley sculpted by glaciers from one-hundred-million-year-old granite, containing high waterfalls. The 28,000 square mile mountain range is home to three national parks, twenty wilderness areas, and two national monuments. These areas include Yosemite, Sequoia, and Kings Canyon National Parks, and Devil’s Postpile National Monument. Many of these places are not accessible by roads, although many are. Still from a hiker’s standpoint, these places are much more interesting if they are approached by trail.

During the years when people headed west to look for gold, the Sierra Nevada was often the destination of choice. Nevertheless, at that time, traveling across the wild west was very dangerous. Many rich travelers had to hire armed men to protect them on dangerous routes. Thankfully that is not the case today, although, there could be times when we feel the need for armed guards. Nevertheless, I have found that on most trails, people 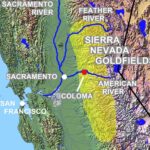 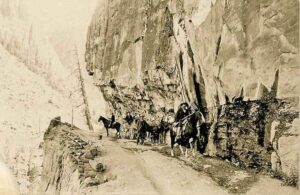 are friendly and kind. Of course, there are always the wild animals, which I have never come across on a trail…perhaps strangely, but true, nevertheless. The biggest “problem animal” I have ever come across was a few cows, who decided that they didn’t want to get off the trail for these strange creatures to pass them. I finally had to slap my hands together, after which, they decided that I was the dangerous one, and they left. One of these days, maybe I will have the opportunity to hike up to Yosemite Falls. I think I would really enjoy it.

2 Responses to Into High Gear