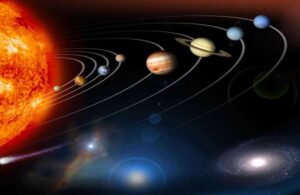 Man has always been interested in the stars and planets, even before we really knew what they were. Those mysterious lights in the sky that somehow just showed up every night and disappeared every morning, only to be replaced with the bright sunlight, quickly became a part of our lives from the time we were born. The main thing that has changed over the centuries is the equipment with which we could view space for ourselves.

On September 23, 1846, Johann Gottfried Galle, a German astronomer from Radis, Germany, at the Berlin Observatory with the assistance of student Heinrich Louis d’Arrest, was the first person to view the planet Neptune and know what he was looking at. Of course, other astronomers had seen other planets, but this was the first time anyone actually saw the eighth planet in our solar system. Neptune was believed to be out there in that position, as French astronomer Urbain-Jean-Joseph Le Verrier had calculated the approximate location of the planet to be. Le Verrier, by studying gravity-induced disturbances in the 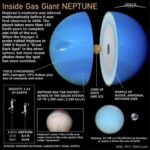 motions of Uranus guessed that another planet was there. He then told Galle of his findings on the 23rd, and the same night Galle and his assistant Heinrich Louis d’Arrest identified Neptune at their observatory in Berlin. Basically, they looked at its movement against a background of stars over 24 hours and that confirmed that it had to be a planet…seeing a place where the stars were blocked by “something” or in this case, Neptune.

Neptune is a blue gas giant, which has a diameter four times that of Earth. The astronomers named it after the Roman god of the sea…why do they always use the Greek or in this case Roman gods? Neptune has eight known moons, of which Triton is the largest. It also has a ring system containing three bright and two dim rings. It completes an orbit of the sun once every 165 years. Since Pluto was “deplanetized” in 2006, because it was demoted to dwarf planet, Neptune became the farthest known solar planet. While it may be the furthest out, it 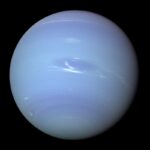 is not the smallest, but rather it’s the fourth-largest planet by diameter, the third-most-massive planet, and the densest giant planet. Neptune’s mass is 17 times the mass of Earth, and slightly more massive than its near-twin Uranus. Neptune is more dense and physically smaller than Uranus, because its greater mass causes more gravitational compression of its atmosphere. It is referred to as one of the solar system’s two ice giant planets

In 1989, the US spacecraft Voyager 2 was the first human spacecraft to actually visit Neptune. Nevertheless, while much more has been learned about the eighth planet, the first person to actually find it was Johann Gottfried Galle, way back in 1846.