The Power Of Water 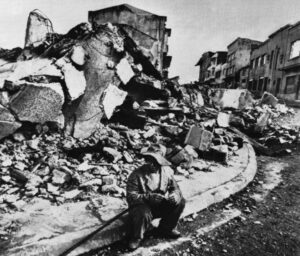 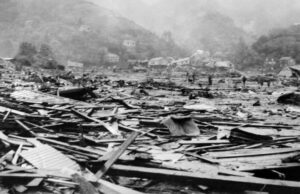 I would never have considered that an earthquake in Chili could affect Hawaii, which is 6,593 miles away, but on May 23, 1960, that seemingly huge distance suddenly became very small. When a 9.5 magnitude earthquake hit Chili on May 22, 1960, thousands of people lost their lives, and a giant tsunami was triggered. By the next day, that tsunami had traveled across the Pacific Ocean and killed an additional 61 people in Hilo, Hawaii. That distance and the amount of devastation seems incredible to me.

The earthquake, which involved a severe plate shift, caused a large displacement of water just off the coast of southern Chile at 3:11pm. The resulting wave, traveling at speeds in excess of 400 miles per hour, moved west and north. The damage to the west coast of the United States was estimated at $1 million, but there were no deaths there.

In 1948, the Pacific Tsunami Warning System was established in response to another deadly tsunami. It worked properly and warnings were issued to Hawaiians six hours before the deadly wave was expected to arrive. Unfortunately, some people ignored the warnings, as always seems to happen. Some other people actually headed to the coast in order to view the wave…like the warning was actually an announcement of a coming attraction. The tsunami arrived only a minute after it was predicted, and it absolutely destroyed Hilo Bay on the island of Hawaii.

People really don’t fully understand just how much destructive power water has, until they see it in action. When the waves hit Hilo Bay, they were thirty-five-feet high. They were so strong that they bent parking meters to the ground and wiped away most of the buildings. When the wave hit a 10-ton tractor, it was swept out to sea like it was made of Styrofoam. you would think that boulders would be sturdy enough to hold back the waves, but the 20-ton boulders that made up the seawall were easily moved 500 feet. The 61 people who lost their lives were in Hilo…the hardest hit area of the island chain.

With all of that destruction, you might be inclined to think that the waves would have lost power, and to a degree, I suppose they did. Nevertheless, the tsunami continued to race further west across the Pacific. Even given a ten-thousand-mile distance from the earthquake’s epicenter, Japan still wasn’t able to provide enough warning time to get the people out of harm’s way. The wave hit Japan at about 6:00pm, more than a full day after the earthquake. The tsunami struck the Japanese islands of Honshu and Hokkaido. The wave’s power was still enough to crushing 180 people, and to leave 50,000 more homeless. In Japan, it caused $400 million in 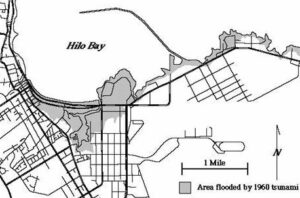 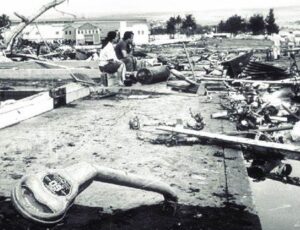 damages. With everything destroyed by this one earthquake and the subsequent tsunami, you would think that people would finally learn to stay away from the shore during a tsunami warning, but every year people lose their lives because they decided to cross paths with waves…be it from tsunamis, hurricanes, and other floods. Water is a force to be reckoned with. It should be considered very dangerous.