Drug Use In The Third Reich 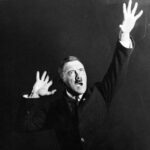 Recently, I ran across an article about drug use in among the Nazi regime. The article really caught my attention, because in many ways drug use among the Nazis made sense. The things they did to people would have been much easier if they were under the influence of drugs…mostly because they would be less likely to remember what they had done, and if they remembered, they would be less likely to care about what they had done. Drugs tend to dull the senses, and in many cases that makes the person relaxed and calm, but there are some drugs that make the person violent too. The article started out saying, “‘You can learn a lot about a culture from its drug use.’ Robert McAlmon, an American author living in Berlin during the tumultuous Weimar years, marveled that ‘dope, mostly cocaine, was to be had in profusion’ at ‘dreary night clubs’ where ‘poverty-stricken boys and girls of good German families sold it, and took it.’”

Over the years, a number of drugs have been banned, due to the danger of their use, the reactions of those taking them, or just that they are now deemed illegal. Cocaine was banned in 1924, but that has not really stopped it’s use. Like most drugs, if there is a “market” for it, someone will find a way to get the drug to the “customer.” Meth has become so easy to make and uses common (but poisonous) ingredients, so it has become the drug of choice for many drug addicts today. Some prescription drugs are addictive, and have become a part of the drug trafficking world too. Drugs like Opioids and Morphine are fairly easy to obtain from a doctor, because they hare used for many injuries and common ailments. Then they become addicted, and when they can no longer get a prescription for those drugs, they move on to illegal drugs.

Strangely, when the Nazis rose to power, illegal drug consumption actually fell. The Nazis regarded drugs as “toxic” to the German body. Drug users were given prison sentences, and addicts were classed…along with Jews, gypsies and homosexuals…as undesirable social elements. By the end of the 1930s, the Nazi pharmaceutical companies had turned away from opioids and cocaine, and moved towards synthetic stimulants. These could be produced entirely within Germany, per Nazi directive, of course. More money in the pocket of Hitler’s regime. “The transition from cabaret cocaine to over-the-counter meth helped fuel what German journalist Norman Ohler in his new book Blitzed: Drugs in the Third Reich calls the ‘developing performance society’ of the early Nazi era, and primed Germany for the war to come.”

I’m sure that the Third Reich, while calling it “developing performance society,” knew that the the use of these drugs was going to make the people taking the drugs more compliant to the government. Once a person is addicted to a drug, many will do anything to get a “fix,” including theft, robbery, breaking and entering, selling themselves, and even begging to get more. In 1937, the German pharmaceutical company called Temmler-Werke introduced Pervitin, which was a methamphetamine-based stimulant. The formula was developed by Dr Fritz Hauschild. He went on to pioneer East Germany’s sports doping program. Within a few months, this variant of crystal meth was available without a prescription, and was even sold in boxed chocolates. It was also widely adopted by people from all walks of life to elevate mood, control weight gain, and increase productivity. Pervitin’s success as an over-the-counter “wonder drug” caused a rebound in the country’s economic status after the war. The country came out of an economic depression to nearly full employment. Marketing for Pervitin claimed it would help “integrate shirkers, malingerers, defeatists, and whiners” into the rapidly expanding workforce. Students took it to cram for exams, while housewives took it to stave off depression. Pervitin use was so common that it became a normal part of life in the early Third Reich. For the military personnel of Hitler’s army, the chemical was a great weapon to fight the so-called “war on exhaustion.” The troops started relying on the “tank chocolate” to keep them alert for days on end. Before long, Nazi medical 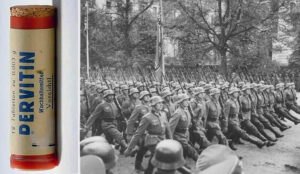 officials became increasingly aware of Pervitin’s risk factor. The tests performed on soldiers found that critical thinking skills declined the longer they stayed awake, even if the short-term gains were appealing enough. Even after drug sales to the general public were restricted in April 1940, the German Army High Command issued the so-called “stimulant decree,” ordering Temmler to produce 35 million tablets for military use. Of course, we know now that methamphetamine use is not only dangerous, but often deadly. The addictive effects alone can ruin lives. I don’t suppose Hitler cared much about that, as long as his troops obeyed his commands. I wonder how many men lost their lives because of the drug.