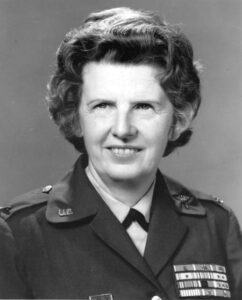 War heroes come in many forms, and Colonel Ruby Bradley was one of the great ones. Born on December 19, 1907 in the small town of Spencer, West Virginia the daughter of Fred O Bradley and Bertha Welch. Bradley was the fifth of six children, and she was raised on a farm in Roane County, West Virginia. From a young age, she was taught to work hard on her parents farm. Farm kids are not strangers to hard work. The farm animals and the crops require that every member of the family had to do their part, meaning men, women, and children to assume many roles such as manual labor. From an early age, Ruby understood the worth of manual labor and hard work. She was a hard worker and she was not a quitter.

Bradley’s life took a drastic turn during World War II. Prior to World War II, as a career Army nurse, Colonel Ruby Bradley served as the hospital administrator in Luzon in the Philippines. When the Japanese invaded the Philippines, three weeks after the attack on Pearl Harbor, she and a doctor and fellow nurse hid in the hills. Unfortunately, they were turned in by locals and taken to the base, which had been turned into a prison camp. In 1943, Bradley was moved to the Santo Tomas Internment Camp in Manila. It was there that she and several other imprisoned nurses earned the title “Angels in Fatigues” from fellow captives. For the next several months, she provided medical help to the prisoners and sought to feed starving children by shoving food into her pockets whenever she could, often going hungry herself. As she lost weight, she used the room in her uniform for smuggling surgical equipment into the prisoner-of-war camp. At the camp she assisted in 230 operations and helped to deliver 13 children. Bradley and her staff spent three years treating fellow POWs, delivering babies, and performing surgery. They also smuggled supplies to keep the POWs healthy, although Bradley herself weighed a mere 84 pounds when the Americans liberated the camp in 1945. 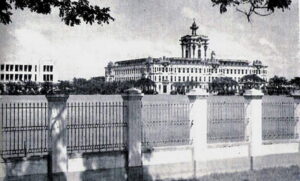 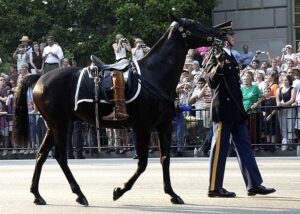 funeral with full honors at Arlington National Cemetery. “Her coffin was escorted to the grave site by six white horses, and the symbolic riderless horse followed, while the Army Band played traditional hymns. “A riderless horse (which may be caparisoned in ornamental and protective coverings, having a detailed protocol of their own) is a single horse, without a rider, and with boots reversed in the stirrups, which sometimes accompanies a funeral procession. The horse follows the caisson carrying the casket.” A firing party of seven sounded three volleys in her honor, and the flag covering her coffin was presented to a relative.” Many family members and Army soldiers paid their respects by placing roses on top of the coffin and also saluting her resting place as they left. She was 94.