Theft Of The Mona Lisa 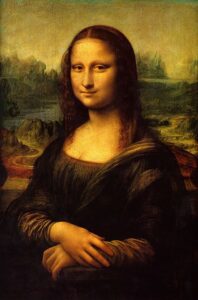 On this day, August 21, 1911, an amateur painter decided to paint a painting near Leonardo da Vinci’s famed Mona Lisa, only to find out that someone had walked into the Louvre that morning, taken the priceless painting off the wall, hidden it under his clothing, and walked out of the museum. The first thought is, of course, who would be so brazen, but my second thought is how could he have pulled that off? How much clothing would it take to simply “tuck” a 20 inch by 30 inch painting into his clothing. Nevertheless, earlier that day, Vincenzo Perugia had walked into the Louvre, removed the famed painting from the wall, hid it beneath his clothes, and escaped.

The theft, somehow carried out in complete secrecy, left the entire nation of France is shock. There were many theories as to what could have happened to the priceless painting. Strangely, professional thieves were not on the list of suspects, because they would have realized that it would be too dangerous to try to sell the world’s most famous painting. I suppose that a private art collector might have hired a professional to steal it for a secret collection, but that didn’t seem to be the case. One theory, or 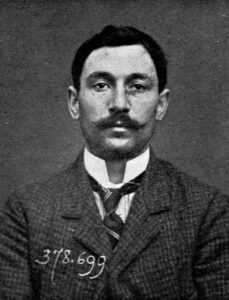 rumor really, in Paris was that the Germans had stolen it to humiliate the French. I’m not sure that made any sense before either of the world wars, but I guess tensions between the nations could have been on the rise then.

For two years, investigators and detectives searched for the painting without finding any real leads. Then in November 1913, the thief mad his first move…the one that would eventually bring his doom. Italian art dealer Alfredo Geri received a letter from a man calling himself Leonardo. It indicated that the Mona Lisa was in Florence and would be returned for a hefty ransom. Why he waited two years to ask for a ransom is beyond me, other than the fear of getting caught. The meet was set to pay the ransom, and when Perugia attempted to receive the ransom, he was captured. The painting was recovered, unharmed.

In a way, you could say that this was an inside job. Perugia knew his way around, and knew areas where the 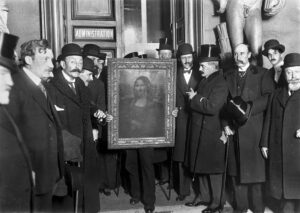 Louvre might be vulnerable. Perugia, a former employee of the Louvre, claimed that he had acted out of a patriotic duty to avenge Italy on behalf of Napoleon. That claim was disproven when prior robbery convictions and Perugia’s diary, with a list of art collectors, caused most people to believe that he had acted solely out of greed. Perugia served seven months of a one-year sentence and later served in the Italian army during the First World War. The Mona Lisa is back in the Louvre, where improved security measures are now in place to protect it. I guess that one good thing came of the theft…better security. Of course, that might have come with technological advances anyway.

One Response to Theft Of The Mona Lisa