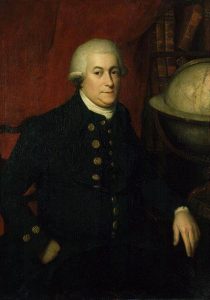 Captain George Vancouver, a British Officer, commanded the HMS Discovery and its accompanying ships on an exploratory voyage of the Pacific Northwest, between the years of 1791 and 1794. Vancouver and his crew were privileged to be the first to see places like Mount Saint Helens and the first to explore the Puget Sound. Their goal was to explore every bay and outlet in the region…following the coasts of Oregon and Washington. Men were sent in smaller boats to explore the Columbia River and enter the strait of Juan de Fuca.

The larger ships, including the Chatham…the Armed Tender of the HMS Discovery, often anchored in the safe harbors, while the smaller vessels explored the many channels and rivers along the coast. On April 29, 1792, the ships entered the Straits of Juan de Fuca and anchored in the calm waters of Discovery Bay. While the ships stayed in the bay…using it as a base, Vancouver and his men explored the waters of Admiralty Inlet and Hood Canal. After several weeks of exploring, the Chatham began to sail north across the Straits of Juan de Fuca to explore the San Juan and Lopez Islands. After successfully exploring the islands, the Chatham sailed southward in May to rejoin the HMS Discovery and continue their explorations south. They moved the explorations south, as far as Commencement Bay in Tacoma, before turning around and returning north, where they hoped that the waters were going to be safer. 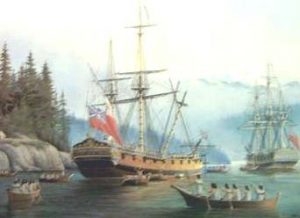 When the ships arrived at the Puget Sound, a storm was raging, accompanied by severe currents and tides. While crossing an unknown channel, the Chatham was caught by a flood tide and swept away helpless. In an effort to slow her progress, the crew dropped her stream anchor. Unfortunately, the strain was too much and the cable snapped. Amazingly, the Chatham survived, but the sweep of the waters did not locate the lost anchor, so the ship rejoined the HMS Discovery.

Vancouver’s journal entry for June 9, 1792 read, “We found tides here extremely rapid, and on the 9th in endeavoring to get around a point to the Bellingham Bay we were swept leeward of it with great impetuosity. We let go the anchor in 20 fathoms but in bringing it up such was the force of the tide that we parted the cable. At slack water we swept for the anchor but could not get it. After several fruitless attempts, we were at last obliged to leave it.”

These days, the anchor would be a treasure of great value, which motivated a company called Anchor Ventures, 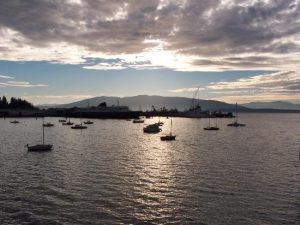 LLC of Seattle to initiate a search of not the Cannel, but rather off Whidbey Island’s northwestern shore. Their bet that the Chatham wasn’t with the Discovery at the time of the storm apparently paid off. Anchor Ventures pulled up what they believe to be the long lost anchor in 2014. Since then, the team has been trying to prove its identity. Skeptics aren’t so sure that this is the right anchor, because they say it is heavier than those of the late 1700s. That said, the question remains. Is the anchor still there, or did they jump to conclusions. It’s hard to say, and proof will be tough to find. I think it is not likely that they found the right anchor…especially looking in the wrong place.

One Response to The Question Remains