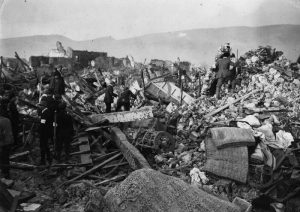 I have never been caught up in a serious earthquake, and I don’t think I want to, but stories of survival in an earthquake, are always filled with hope. Earthquakes remain the one natural disaster that the scientists can’t successfully predict. They may make the attempt, but any earthquake that comes on or near the date predicted, is coincidental. They might come close one time, but totally miss it the next. Earthquakes simply confound the scientists. The Avezzano Earthquake near Avezzano, Italy was no exception.

At 7:49am on January 13, 1915, the people in the Marsica area, a suburb of Avezzano, were going about their day…business as usual, but at 7:50am everything changed. It was a clear, cold morning, after a hard winter night during which the Northern wind blew through the area with a display of crazy violence from dusk until dawn. One survivor had been running errands, and when he came back, he found his brother and cousin sitting by the 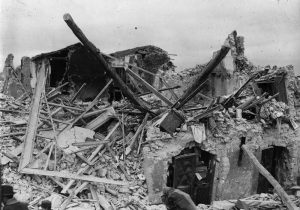 fireplace, while his mother was busy preparing milk and coffee for her two boys. The younger brother would be heading to school after breakfast, but 15 minutes later at 7:50am, the earth started to rumble around them.

It didn’t matter that it was 1915, because there are no warning systems for earthquakes in this day and age either. The only thing that might have made a difference would have been buildings that were more earthquake proof. Still, it seems that deaths during earthquakes can happen even if the buildings are earthquake proof. The magnitude 6.7 earthquake destroyed the city. Often we think of an earthquake that brings that much destruction being of far greater magnitude than a 6.7 and maybe the stability of the buildings was the problem. People woke up with debris on them, finding it hard to breathe. Families were ripped apart. Some 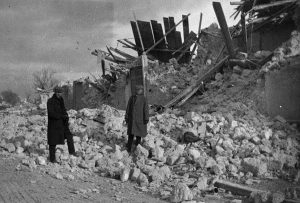 lived and some died. The city and the surrounding area was in mourning.

When the people came outside, a terrifying sight greeted them. There was a huge greyish cloud that was hanging over the suburbs. The city below the cloud was flattened. The air was filled with the acrid smell of old plaster, and the screams and cries of people who were trapped or had found their loved ones deceased. The city was in despair. Death was everywhere. Beloved, historic buildings were gone…many of which had been thought to be indestructible. The total loss of life in the 1915 Avezzano earthquake was 30,000 people. The financial loss was $60 million.