My husband’s aunt, Esther Hein really likes flowers. She loves gardening and watching her creation bloom. That is a talent that I just don’t have, but Esther does have it…and many others. She is an artist, and has painted great landscapes, which is my favorite, and on a round saw blade, which is very cool. Esther also enjoys making quilts and sewing other things. She made a set of curtains for my mother-in-law, Joann Schulenberg, and while she had Alzheimer’s Disease, and didn’t remember many things, she always remembered that Esther made those curtains for her. I always loved that my mother-in-law kept Esther in her heart. I even remember the time that I was helping her get ready for bed, and she didn’t want to go. Suddenly, out of the blue, she said to me, “Don’t Esther!!” Of course, it had a funny connotation for me too, because my mother-in-law often tried to get out of going to bed so early, but I had to work the next day, so she had to go to bed before the 10:00pm news. The funny thing was that for once I wasn’t the one getting in trouble for making her go to bed. She blamed Esther that day.

I’m sure that over the years Esther has had to carry some heavy burdens. She raised three children mostly as a single mom, and did a great job of it. They are all responsible members of society and great people. Esther has taught them the way they should go. She has been active in her church and she loves the Lord. She loves the outdoors and camping, but I’m not sure she has been able to do that very much in the last few years. She 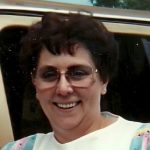 loves animals and people. She loves helping people, and in fact, lately she has been helping by delivering food boxes to needy people. There are always needy people these days, from job losses, to home losses, to fire losses, people have needs, and Esther is our there helping to fill those needs. Even though her area of the country, Oregon has been inundated with wildfires this year, just like California, and the smoke was heavy at times, but Esther’s daughter Vina Frye assured me that Esther was safe, and so was she. In fact, it was Vina who told me that Esther was delivering the food boxes. Vina is so proud of her mom and her giving heart…and so am I. Today is Esther’s 80th birthday. Imagine that 80 years old, and she is still helping other people. Happy birthday Esther!! Have a great day!! We love you!!

One Response to Still Helping Other People