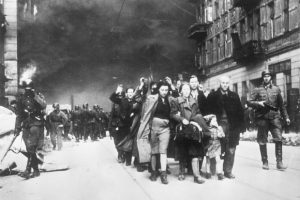 When Hitler began his systematic genocide of the Jewish people during World War II, many of the previously free people found themselves suddenly jailed. They had no weapons with which to fight for their freedom, but they knew that they were going to have to make a decision to either fight for their lives, or lose their lives. Some were too old or too young to fight, and some were women, and many men didn’t think these women could handle the fight at hand, but at some point they would have to fight or die. Hitler was relentless, and the Jewish people were fighting for their lives.

When Hitler set his plan in motion, he made it impossible for them to do business. Overnight, all Jewish businesses were blackballed. That was how it started anyway. The Jewish people were no longer allowed to do business with non-Jews. That action meant that the income that these successful Jewish people had, was instantly taken from them…symbolically. Later, It would be taken in every way. Their shops were looted, their property confiscated, and their homes given to others. As the Jewish people were banished to the ghettos, they had just moments to pack a small bag with the things they could carry, or more importantly the things they couldn’t do without…clothing, any food items, and keepsakes. It wasn’t much. There wasn’t room for much.

The ghettos were complete pits of filth, disease, and humanity. People were piled into cramped quarters, forced to share living quarters with people they didn’t know. Of course, the tight quarters was not the worst thing about the ghettos. The people had no rights. If a Nazi soldier raped, beat, or shot a Jewish person, there was no punishment, because they were no longer considered human, and therefore had no rights. Although it was considered an abomination to sleep with a Jewish person, rape was actually considered just another form of punishment. The Nazis didn’t care. A death meant one less Jew to have to house.

The Warsaw ghetto in Poland occupied an area of less than two square miles but soon held almost 500,000 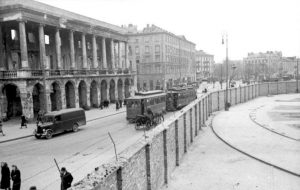 Jews in the deplorable conditions common to ghettos. Disease and starvation killed thousands every month, and when death did not come fast enough, the Jews were transferred to the next level of their torture. Beginning in July 1942, 6,000 Jews per day were transferred to the Treblinka concentration camp. They went by way of cattle cars, packed so tightly that it was standing room only. In fact, if a prisoner died along the way, their body remained standing…held up by the people so tightly packed in around them.

As word got back to the ghettos that the death rate of those being transferred to the camps, either on the trains, or in the gas chambers when they reached their final destination, the Jewish people knew that something was going to have to be done. They would have to fight for their lives. Of course, the resistance was already working. There were those who saw the writing on the wall from the start. When word came down that the Warsaw ghetto was going to be closed and the Jews deported to the camps, it was time.

On January 18, 1943, as Nazi forces were attempting to clear out the Warsaw ghetto they were met by gunfire from Jewish resistance fighters. Although the Nazis assured the remaining Jews that their relatives and friends were being sent to work camps, they no longer believed the Nazi lies. An underground resistance group had been established in the ghetto, called the Jewish Combat Organization (ZOB). Limited arms had been acquired at great cost, and it didn’t matter, because this was a fight to the death. As the Nazis entered, the ZOB unit ambushed them, killing a number of German soldiers. The fighting lasted for several days.

On January 18, 1943, when the Nazis entered the ghetto to transport a group of Jewish prisoners, a ZOB unit ambushed them. Fighting lasted for several days, and a number of Germans soldiers were killed before they withdrew. On April 19th, Heinrich Himmler announced that the ghetto was to be emptied of its residents in honor of Hitler’s birthday the next day. I guess Himmler thought murdering all those people would make a great birthday gift for Hitler. That day, more than 1,000 SS soldiers entered the confines of the ghetto, armed with tanks and heavy artillery. Of the 60,000 Jews remaining in the ghetto hid in secret bunkers, more than 1,000 of the ZOB resistance members took up arms and fought back with gunfire and homemade bombs. Again the soldiers withdrew, despite only suffering moderate casualties. Then on April 24th, the Germans and launched an all-out attack against the Warsaw Jews. 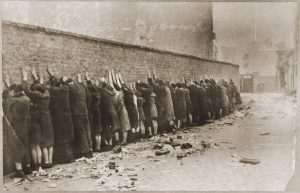 The German soldiers stormed through the ghetto, blowing up buildings everywhere. They slaughtered thousands of innocent people. The ZOB took to the sewers to continue the fight. It was cover, but how awful. Then, on May 8th their command bunker fell to the Germans and their resistant leaders committed suicide. I’m sure they thought they had failed their people. By May 16th, the ghetto was firmly under Nazi control, and the last Warsaw Jews were deported to Treblinka. Some 300 German soldiers were killed, and thousands of Warsaw Jews were massacred during the Warsaw Uprising, but that wasn’t the end of the death. Virtually all those who survived the Uprising to reach Treblinka were dead by the end of the war.