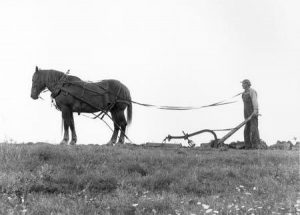 As we head into Spring, the Farmers start planning for the spring planting. In man’s early years, that meant finding a stick to poke a hole in the ground so the seeds could be placed in the hole and covered. While that may have been fine for the small one-family garden, it was ineffective for the large farms we have today. Supplying many people with food, like today’s farmers do, means that plowing and planting has to be more streamlined.

Watching shows like Little House on the Prairie, and others that took in a planting period, most of us have seen the hand plow used by farmers in the Old West. It was hooked up to a horse, and the farmer had to not only follow 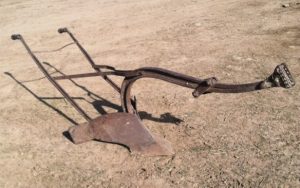 behind the horse, being careful to keep up, but also to force the blade of the plow into the dirt to turn it over. The plow worked, but it was very labor intensive…and in the heat of the day, a man could get heat stroke plowing his field…literally!!

The wheeled plow, which was drawn by oxen at first, but later by horses, made possible the northward spread of European agriculture. Finally, the farmer could sit and let the horse and machine do the work. It was still hot in the mid-day sun, but the work wasn’t so labor intensive. The 18th-century addition of the moldboard, which turned the furrow slice cut by the 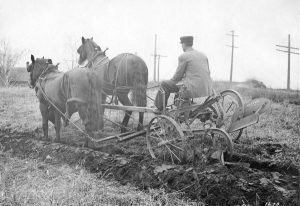 plowshare, was an important advance. The black hard-packed soil in the American Midwest in the mid-19th century challenged the strength of the existing plow. That was when American mechanic John Deere invented the all-steel one-piece share and moldboard. The three-wheel sulky plow followed and finally, with the introduction of the gasoline engine the tractor-drawn plow. Further improvements followed until we had the advanced farming equipment we have today. The plow has come a long way, and the work of a farmer has become a little easier, but it is still hard work, and without the farmers we would have serious food shortages. Thank you to all our farmers!! Don’t forget to thank a farmer today.