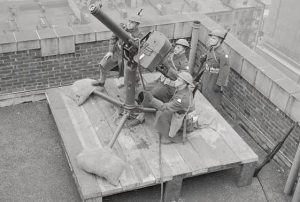 When the Japanese attacked Pearl Harbor, everything changed in an instant. Prior to December 7, 1941, no one had guessed that the Japanese planes could actually sneak up on a place as big as Pearl Harbor…much less 353 Imperial Japanese aircraft (including fighters, level and dive bombers, and torpedo bombers) in two waves, launched from six aircraft carriers. All in all, it was enough to cause a nation to be a little freaked out…to say the least.

In the frantic weeks that followed the Pearl Harbor attack, the United States began to look at everything differently. Japanese-Americans were no longer trusted as loyal. Planes coming in to our coasts were feared…even when we knew who they were. Many Americans believed that enemy raids on the continental United States were imminent. Then, on December 9, 1941, everything came to a head when unsubstantiated reports of approaching aircraft caused a minor invasion panic in New York City that sent stock prices falling. On the West Coast, inexperienced pilots and radar men mistook fishing boats, logs, and even whales for Japanese warships and submarines. People were seeing the enemy everywhere, and everyone was tense. After US Secretary of War Henry Stimson warned that American cities should be prepared to accept “occasional blows” from enemy forces, the mood changed. Nobody was feeling okay with enemy blows, occasional or otherwise.

Then, on February 23, 1942, a Japanese submarine surfaced off the coast of Santa Barbara, California, shooting over a dozen artillery shells at an oil field and refinery. No one died in the attack, and the coast received only minor damage, but the attack marked the first time that the mainland United States had been bombed during World War II. The day after the oil field attack, people were still paranoid, and the raw nerves brought itchy trigger fingers. The events of that day aligned to produce one of the most shocking home front incidents of the war. It began on the evening of February 24, 1942, when naval intelligence instructed units on the California coast to steel themselves for a potential Japanese attack. For the next few hours, they military calmly prepared for what they perceived inevitable attack. Shortly after 2am on February 25, military radar picked up what appeared to be an enemy contact some 120 miles west of Los Angeles. Air raid sirens sounded and a citywide blackout was put into effect. Within minutes, the troops manned anti-aircraft guns and began sweeping the skies with searchlights.

Just after 3am the shooting started, triggered by reports of an unidentified object in the skies. The troops in Santa Monica unleashed a hail of anti-aircraft and .50 caliber machine gun fire. Before long, many of the city’s other coastal defense weapons had joined in. The Los Angeles Times wrote, “Powerful searchlights from countless stations stabbed the sky with brilliant probing fingers, while anti-aircraft batteries dotted the heavens with beautiful, if sinister, orange bursts of shrapnel.” The entire scene was so chaotic over the next several 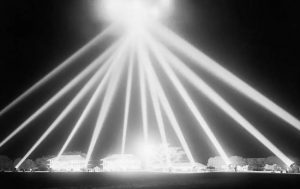 minutes, that it appeared Los Angeles was indeed under attack. Still, many of those who looked skyward saw nothing, but smoke and the glare of ack-ack fire. “Imagination could have easily disclosed many shapes in the sky in the midst of that weird symphony of noise and color,” Coastal Artillery Corps Colonel John G. Murphy later wrote. “But cold detachment disclosed no planes of any type in the sky…friendly or enemy.”

Still, for many others along the coast, the threat appeared to be very real. From across the city reports poured in describing Japanese aircraft flying in formation, as well as paratroopers. There was even a claim of a Japanese plane crash landing in the streets of Hollywood. “I could barely see the planes, but they were up there all right,” a coastal artilleryman named Charles Patrick later wrote in a letter. “I could see six planes, and shells were bursting all around them. Naturally, all of us fellows were anxious to get our two-cents’ worth in and, when the command came, everybody cheered like a son of a gun.” The barrage continued for over an hour, and by the time a final “all-clear” order was given later that morning, Los Angeles’ artillery batteries had pumped over 1,400 rounds of anti-aircraft ammunition into the sky.

It was only in the light of day that the American military units made a puzzling discovery: there appeared to have been no enemy attack. “Although reports were conflicting and every effort is being made to ascertain the facts, it is clear that no bombs were dropped and no planes were shot down,” read a statement from the Army’s Western Defense Command. The counter-attack was, in reality, the whole attack. The only damage during the “battle” had come from friendly fire. Anti-aircraft shrapnel rained down across the city, shattering windows and ripping through buildings. One dud landed in a Long Beach golf course, and several residents had their homes partially destroyed by 3-inch artillery shells. There were no serious injuries from the shootout, but it was reported that at least five people had died as a result of heart attacks and car accidents that occurred during the extended blackout. In a preview of the hysteria that would soon accompany the Japanese internment, authorities also arrested some 20 Japanese-Americans for allegedly trying to signal the nonexistent aircraft.

Over the next few days, government and media outlets issued contradictory reports on what later became known as the “Battle of Los Angeles.” Secretary of the Navy Frank Knox dismissed the firefight as a false alarm brought on by “jittery nerves,” but Secretary of War Henry Stimson echoed Army brass in saying that at least 15 planes had buzzed the city. He even advanced the provocative theory that the phantom fighters might have been commercial aircraft “operated by enemy agents” hoping to strike fear into the public. Stimson later backpedaled his claims, but there was still the matter of the thousands of military personnel and civilians who 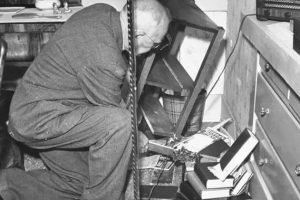 claimed to have seen aircraft in the skies over Los Angeles. According to an editorial in the New York Times, some eyewitnesses had spied “a big floating object resembling a balloon,” while others had spotted anywhere from one plane to several dozen. “The more the whole incident of the early morning of February 25 in the Los Angeles district is examined,” the article read, “the more incredible it becomes.” Politics had stepped in to put its spin on matters, and I suppose that with all that, the truth might never be known…other than no plane was found crashed in Hollywood. In reality, the whole “battle” was brought about by anxious nerves and itchy trigger fingers.