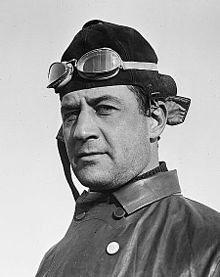 Whenever disaster strikes, the inevitable souvenir hunters seem to come out of the woodwork. It doesn’t matter that someone, or maybe many someones have died in the tragedy. Souvenir hunters think only of themselves, and the stories they can tell, complete with their “precious” souvenir to back up their story. The whole thing makes decent people nauseous.

On November 17, 1910, famous aviator and stunt pilot, Ralph Johnstone was performing in an air show in Denver, Colorado, when tragedy struck. Johnstone knew the risks of his occupation, and I suppose that he knew that one day, his “number” would come up. Still, you never really believe that it will happen to you, do you? Johnstone was the holder of the World Altitude Record, and the crowds were never disappointed with the show he gave them. That day, at Overland Park would be no exception.

Johnstone flew a Wright Biplane, and he was knows for his many spiral glides, which had made the Wright aviators famous. Johnstone had won many prizes, and on two occasions had expressed the belief that he would be the first to do real fancy work in the sky…and become in a word, the aviating gymnast and loop an imaginary loop. In the day’s first flight, when he was in the air with his friends, Walter Brookins and Archibald Hoxsey. Johnstone had gone through his usual program of dips and glides, and the plane had perfect control, with no indication of structural problems.

On his second flight, Johnstone rose again, and after a few circuits of the course to gain height headed toward the foothills. “Still ascending, he swept back in a big circle, and as he reached the north end of the enclosure, he started his spiral glide. He was then at an altitude of about 800 feet. With his plane tilted at an angle of 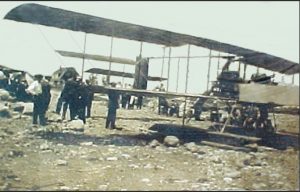 almost 90 degrees, he swooped down in a narrow circle, the airplane seeming to turn almost in its own length. As he started the second circle, the middle spur, which braces the left side of the lower plane, gave way, and the wing tips of both upper and lower planes folded up as though they had been hinged. For a second, Johnstone attempted to right the plane by warping the other wing up. Then the horrified spectators saw the plane swerve like a wounded bird and plunged straight toward the earth.”

Witnesses said that “Johnstone was thrown from his seat as the nose of the plane swung downward. He caught on one of the wire stays between the plane and grasped one of the wooden braces of the upper plane with both hands. Then, working with hands and feet, he fought by main strength to warp the planes so that their surfaces might catch the air and check his descent. For a second it seemed that he might succeed, for the football helmet the wore blew off and fell much more rapidly than the plane.”

With one wing of his machine crumbled like a piece of paper, Ralph Johnstone, dropped like a rock from a height of 500 feet into the enclosure at Overland Park aviation field and was instantly killed…nearly every bone in his body was broken. That was when the spectators turned “souvenir hunters.” Scarcely had Johnstone hit the ground before morbid men and women swarmed over the wreckage, fighting with each other for souvenirs. 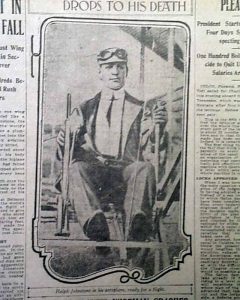 One of the broken wooden stays had gone almost through Johnstone’s body. Before doctors or police could reach the scene, one man had torn this splinter from the body and run away, carrying his “trophy” with Johnstone’s blood still dripping from it. The crowd tore away the canvas from over the body, and even fought for the gloves that had protected his hands from the cold. The scene was utterly disgusting.

Johnstone had attempted to cheat death once too often, but “he played the game to the end, fighting coolly and grimly to the last second to regain control of his broken machine.” Fresh from his triumphs at Belmont Park, where he had broken the world’s record for altitude with a flight of 9,714 feet, Johnstone attempted to give the thousands of spectators an extra thrill with his most daring feat, the spiral glide, which had made the Wright aviators famous. The spectators got their thrill, but it cost Johnstone his life.