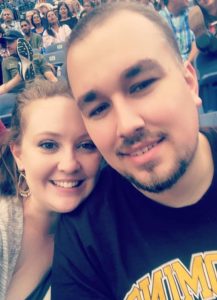 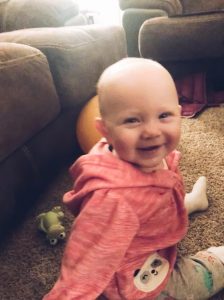 My grand-nephew, Keifer Balcerzak has been in our family since his dad, Dave married my niece, Chantel in 2002. In that time I have watched him grow from young teenaged boy of 14 years, to a great husband and father. In 2015, Keifer married his long-time girlfriend, Katie, and then just before Christmas of 2017, Keifer and Katie welcomed their daughter, Reece, who arrived far earlier than she was supposed to and gave everyone a scare…especially her parents. With Reece’s arrival, everything changed for Keifer and Katie. Yes, babies change things, but having a baby that must also fight for her life is something that most of us don’t go through, and if you weren’t grown up before that time, you definitely grew up then. Watching your child struggle to grow and catch up to where she should have been when she was born is very hard. Keifer and Katie learned to lean on and depend on each other. They showed what they were made of. There strength was amazing to watch. Today, their family is intact. Reece is a growing and soon-to-be two year old girl.

Keifer has always been Dave’s mini-me, although he is no longer shorter than his dad. Nevertheless, in personality, looks, and pretty much every other way, Keifer and his dad are two of a kind. They are both very strong family men. They love their families with their whole being. When these two commit to something, they stay committed. They are very loyal to family and friends, and they have a giving heart. They are also good friends, a perk that comes later in life when the parenting skills were strong and in place. It is the reward for good parenting. I know that Keifer and Katie will have the same reward when their daughter and their future 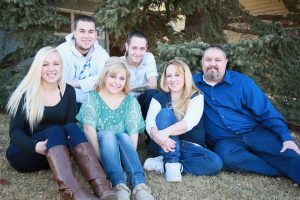 children grow up. Of course, the greatest parenting skill is love, and they have that, for sure.

Keifer inherited his dad’s talent with tech stuff too. They both have the ability to fix and program just about anything technical. Computers are their forte, and they know them inside and out. They can build them or fix them. They both have kind hearts that lead them to help others whenever they are able. The qualities that Keifer and his dad have endear them to those around them. Today is Keifer’s birthday. Happy birthday Keifer!! Have a great day!! We love you!!