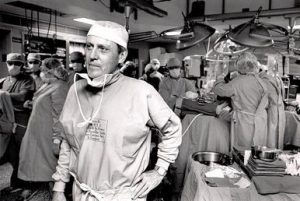 These days, organ transplants are a fairly common event. It’s not that everyone is having them, but that many people who need one get it. Years ago, something like a failing liver was an instant death sentence. The doctors would try to find a way to heal the liver, but they knew that it was not likely to happen. I know that it was heartbreaking for the doctors, who became doctors to save lives, not to lose them.

The real game changer came in 1963, when Dr Thomas E Starzl of Denver, Colorado, performed the first successful liver transplant in history. The patient was a 48 year old man. Unfortunately, he only lived for 22 day, but in those 22 days, a door was opened. Yes, there were problems, and the patient died, but he also lived…with a liver that wasn’t originally his. That was a huge step in the transplant game, and because of that step, Starzl became known as “the father of modern transplantation.”

Between March 1 and October 4, 1963, Starzl attempted 5 human liver replacements. The first patient bled to death during the operation. The other 4 died after 6.5 to 23 days. The autopsies didn’t show rejection, but rather that the patients died of site infections. During this time, there were also single attempts at transplant,

Francis D. Moore in September 1963 in Boston, and Demirleau in January 1964 in Paris. None were considered successful, but as I said. I would disagree, because while the patients died, they also lived. At this point, liver transplants on humans stopped until the summer of 1967. The operation was thought to be too difficult to ever be tried again, but Starzl refused to give up, and in 1967, he performed the first successful human liver transplant, at the University of Colorado Health Sciences Center. This one would be even be considered a success by Starzl. He had also performed the world’s first spleen transplant four months earlier in the same year. After that, transplants became everyday operations.