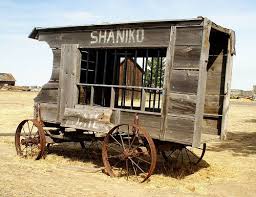 Most people know what the paddy wagon is, and nobody wants to end up in one. An old term for arresting vehicle, the term gets it’s roots from the Irish. Apparently, many of the police officers in early America were of Irish descent. According to Dictionary.com, “Irishman,” 1780, slang, from the pet form of the common Irish proper name Patrick (Irish Padraig). It was in use in black slang by 1946 for any “white person.” Paddy wagon is 1930, perhaps so called because many police officers were Irish. Paddywhack (1881) originally meant “an Irishman.” I suppose that many would look at this slang name for police officer as disrespectful, and they might be right, but no more disrespectful that pig or even cop. Nevertheless, the Paddy Wagon was just a 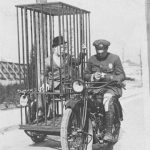 vehicle used to transport prisoners to jail. These days, unless it is a big group being arrested at one time, paddy wagons aren’t used much, but they used to be much more common. I’m sure there were many outlaws who knew the inside of a paddy wagon well…at least the ones who were’t very good at their skill. Those who were good at it usually avoided the paddy wagons.

Back in the Old West, paddy wagons really were wagons, but then so was every other mode of personal transportation, and many forms of business transportation. With the invention of the motorized vehicle, came a different type of Paddy Wagon too. And with the invention of the motorcycle, came an even more unusual type of Paddy Wagon. I 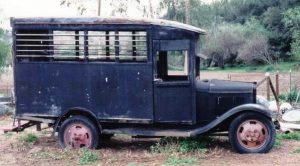 can’t really imagine being taken to jail in a cage attached to a motorcycle, but there were those who were taken that way. This seemed to be common in Los Angeles, which makes sense, because many other places would be too cold for that. Still, imagine being hauled to jail in a cage for all the locals to see. No privacy there. I suppose that would be a special type of punishment for sure, the crime and the embarrassment. Or maybe criminals don’t get embarrassed. I can’t really say. All I know is that if I ever had to be hauled to jail in a Paddy Wagon, I would prefer the type we have today, with no windows.