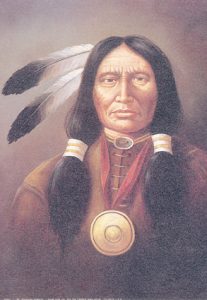 Dull Knife was a leading chief of the Northern Cheyenne tribe, and was sometimes called Morning Star. He had long urged peace with the powerful Anglo-Americans invading his homeland in the Powder River country of modern-day Wyoming and Montana. However, the 1864 massacre of more than 200 peaceful Cheyenne Indians by Colorado militiamen at Sand Creek, Colorado, led Dull Knife to question whether the Anglo-Americans could ever be trusted. He reluctantly led his people into a war he suspected they could never win. In 1876, many of Dull Knife’s people fought along side Crazy Horse and Sitting Bull at their victorious battle at Little Bighorn, but Chief Dull Knife did not participate.

During the winter after Little Bighorn, Dull Knife and his people camped along the headwaters of the Powder River in Wyoming. It was here that they fell victim to the army’s winter campaign for revenge. In November, General Ranald Mackenzie’s expeditionary force discovered the village and attacked. Dull Knife lost many of his people, and along with several other Indian leaders, reluctantly surrendered the following spring. In 1877, the 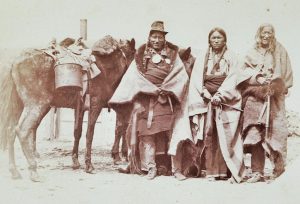 military relocated Dull Knife and his followers far away from their Wyoming homeland to the large Indian Territory on the southern plains, in what is now Kansas and Oklahoma. They were not allowed to practice their traditional hunts, the band was largely dependent on meager government provisions. Beset by hunger, homesickness, and disease, Dull Knife and his people rebelled after one year. In September 1878, they joined another band to make an epic march back to their Wyoming homeland. Although Dull Knife publicly announced his peaceful intentions, the government regarded the fleeing Indians as renegades, and soldiers from bases scattered throughout the Plains attacked the Indians in an unsuccessful effort to turn them back.

Arriving at Fort Robinson, Nebraska, near their Wyoming homeland, Dull Knife and his people surrendered to the government in the hopes they would be allowed to stay in the territory, but that was not to be an option. Administrators instead threatened to hold the band captive at Fort Robinson until they would agree to return south to the Indian Territory. Unwilling to give up when his goal was so close, in early January, Dull Knife led about 100 of his people in one final desperate break for freedom. Soldiers from Fort Robinson chased after the already weak and starving band of men, women, and children, and on January 22, they attacked and killed at 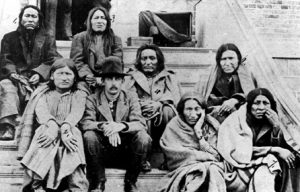 least 30 people, including several in the immediate family of Dull Knife.

Badly bloodied, most of the survivors returned to Fort Robinson and accepted their fate. Dull Knife managed to escape, and he eventually found shelter with Chief Red Cloud on the Sioux reservation in Nebraska. Permitted to remain on the reservation, Dull Knife died four years later, deeply bitter towards the White Man he had once hoped to live with peacefully. The same year, the government finally allowed the Northern Cheyenne to move to a permanent reservation on the Tongue River in Montana near their traditional homeland. At last, Dull Knife’s people had come home, but their great chief didn’t live to join them.