Albert Einstein has always been one of my favorite historic figures, so I decided to look for more information on him. I was surprised about some of the things I found out. Albert Einstein was born in Ulm, Germany in 1879, to parents Hermann Einstein and Pauline Einstein. Albert had a large head at the time he was born, so large, in fact that it startled his mother and grandmother when they saw him for the first time. The “fat” head slowly receded and turned into a normal size. Strangely, the head containing the brain of an amazing historic genius, was not so perfect at birth. Einstein did not speak until the age of three, odd for a genius. He revealed this fact about himself in his biography. Today there is a term, “Einstein Syndrome,” which was coined by Dr. Thomas Sowell, to describe exceptionally bright people whose speech is delayed. Einstein spent his teenage years in Munich, where his family operated an electrical equipment business. Galileo Galilei was Einstein’s favorite scientist.

Albert Einstein’s lifelong love of science and math is no big secret, and in fact is what made him famous, that and his well know genius. That said, I was stunned to find out that his teachers did not 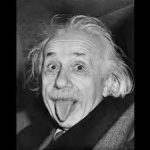 consider him a good student, and they refused to recommend him for further employment. It is said that at 16, Einstein failed an exam that would have allowed him train to become an electrical engineer. One of the things I found to be the most interesting is that Albert Einstein had a poor memory. He could not remember names, dates or phone numbers. I heard that he didn’t see the need to remember what he could have written down. Maybe this was why it needed to be written down. Most people know that he was given the Nobel Prize in 1921. It was the Nobel Prize in Physics that was awarded to Albert Einstein “for his services to Theoretical Physics, and especially for his discovery of the law of the photoelectric effect.” But, Einstein had a funny side too, and would have fit right in with the kids of today…at least in his picture taking. I really it wasn’t a selfie, but as selfies go, it fit right in with that the kids of today are doing, and apparently he though it was just as funny as they do. He was sure pleased with this one. 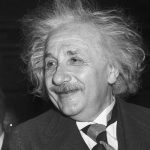 president of Israel after the its first president died in 1952. Einstein politely refused the offer, saying that he did not have the natural aptitude and experience to deal with people properly. He said that he could only understand a little of science and none of human nature. A little of science!!! Really!! I suppose that a genius would know and realize that just like the Bible, our understanding of science has only scratched the surface. Sadly, Albert Einstein had a “practical” view, if you will, of human life. He could have lived longer than he did. But, before he died, doctors suggested surgery to Einstein, because he suffered from a burst blood vessel. However, Einstein refused, stating, “It is tasteless to prolong life artificially.” I don’t understand why he ended such brilliance by refusing an operation that could save him. I find that very sad.