Who Was D.B. Cooper? 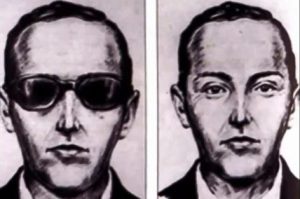 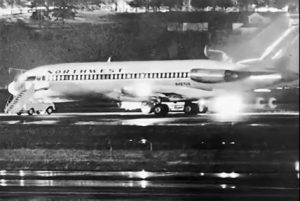 Airplane hijacking isn’t a new thing in our day and age, and usually the hijacker is extremely dangerous and often has plans to crash the plane, but there have been, in times past, some hijackings that weren’t “so bad” in the grand scheme of airplane hijacking, anyway. Sometimes the hijacker really just wanted to use the plane to get them where they wanted to go, planning to release the hostages upon arrival. Of course, hijacking isn’t really a good way to get to your vacation destination, or any other reason for your travel, because you are likely to get shot or arrested for your seemingly innocent attempts.

Nevertheless, on November 24, 1971, a hijacker calling himself D.B. Cooper commandeered a Northwest Orient Airlines 727 shortly after takeoff. He showed a flight attendant something that looked like a bomb, and informed the crew that he wanted $200,000, four parachutes, and “no funny stuff.” The plane landed at Seattle-Tacoma International Airport, where authorities met Cooper’s demands, which was common back then, and evacuated most of the passengers. Cooper then demanded that the plane fly toward Mexico at a low altitude and ordered the remaining crew members into the cockpit. At 8:13 pm, as the plane flew over the 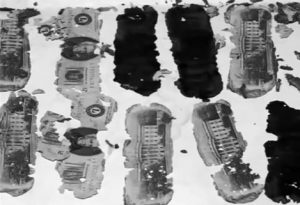 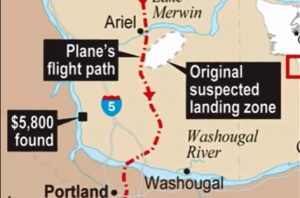 Lewis River in southwest Washington, Cooper parachuted from the plane. The airplane’s pressure gauge recorded the jump. Wearing only wrap-around sunglasses, a thin suit, and a raincoat, Cooper parachuted into a thunderstorm, with winds in excess of 100 mph and temperatures well below zero at the 10,000 foot altitude where he began his fall. The storm prevented an immediate capture, and most authorities assumed he was killed during what they deemed a suicidal jump. No trace of Cooper has ever been found, despite a massive search of the area, and FBI posters, with age analysis.

In 1980, an eight year old boy uncovered a stack of nearly $5,880 of the ransom money in the sands along the north bank of the Columbia River, five miles from Vancouver, Washington. There was no trace of Cooper’s remains in the area. The money was given back to the boy, and he sold some of the bills as souvenirs. No more of the money has ever been found, on the ground or in circulation. More than four decades later, three amateur scientists working for a group called Citizen Sleuths, think they may have found evidence that would narrow down Cooper’s identity. They believe that he had to be an aerospace engineer or a manager. The scientists said they have been analyzing particles found on a clip-on necktie that Cooper left on his seat…number 18E…before 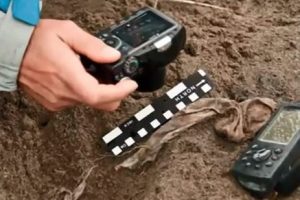 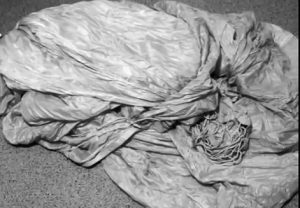 jumping out of the plane. To the naked eye, the piece of fabric was a nondescript black tie from J.C. Penney. But, to the modern-day scientists, the tie was an “incredibly fortunate” piece of evidence in the investigation, because ties are not washed often, so DNA could remain on the tie, and with modern DNA testing, maybe they will be able to figure out who D.B. Cooper really was.