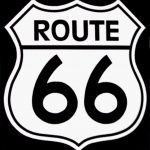 In years gone by, US Route 66 was also known as the Will Rogers Highway, the Main Street of America, or the Mother Road. It was one of the original highways within the US Highway System. US Highway 66 was established on November 11, 1926, with road signs erected the following year. The highway became one of the most famous roads in the United States, and originally ran from Chicago, Illinois, through Missouri, Kansas, Oklahoma, Texas, New Mexico, and Arizona before ending at Santa Monica, California, covering a total of 2,448 miles. It was highlighted by both the hit song “(Get Your Kicks) on Route 66” and the Route 66 television show in the 1960s, and later, “Wild Hogs.” After 59 years, on June 27, 1985, when the American Association of State Highway and Transportation Officials decertified the road and removed all its highway signs, and the famous Route 66 entered the realm of history.

The idea of building a highway along this route was first mentioned in Oklahoma in the mid-1920s. It was a way to link Oklahoma to cities like Chicago and Los Angeles. Highway Commissioner Cyrus Avery said that it would also be a way of diverting traffic from Kansas City, Missouri and Denver. In 1926, the highway earned its official designation as Route 66. The diagonal course of Route 66 linked hundreds of mostly rural communities to the cities along its route. This was to allow farmers to have an easy transport route for grain and other types of produce for distribution to the cities. In the 1930s, the long-distance trucking industry used it as a way of competing with the railroad for dominance in the shipping market.

During the Dust Bowl years of the 1930s, Route 66 was the scene of a mass westward migration, when more than 200,000 people traveled east from poverty-stricken, drought-ridden areas of California. John Steinbeck immortalized the highway in his classic 1939 novel “The Grapes of Wrath.” Beginning in the 1950s, the building of a massive system of interstate highways made older roads increasingly obsolete, and by 1970, modern four lane 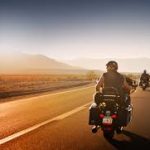 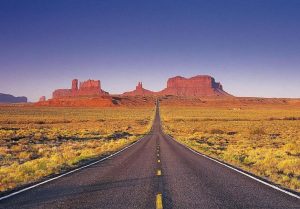 highways had bypassed nearly all sections of Route 66. In October 1984, Interstate 40 bypassed the last original stretch of Route 66 at Williams, Arizona. According to the National Historic Route 66 Federation, drivers can still use 85 percent of the road, and Route 66 has become a destination for tourists from all over the world. After watching Wild Hogs, Bob and I became two of the many tourists who did drive a little bit of it when we drove to Madrid, New Mexico as part of our vacation, doing all the touristy things.