My husband, Bob’s aunt, Esther Hein has always lived far away from the rest of the family, and I find that a little bit sad, because it means that we don’t get to see her very often. Being far away makes it hard on Esther too, because if anything is going on, she feels like she is completely disconnected. We try to keep her informed, but there is nothing quite like distance to make a person feel disconnected from a situation. I suppose that the phone calls, help…especially when she can talk to the person she was so worried about, but I know from experience, it is easier on the family to be in the waiting room of the hospital than a thousand miles away. Whenever Esther would came to Casper for a visit, it was always a big deal. It may not have been an official family reunion, but those mini family reunions are really nice too. It has been a number of 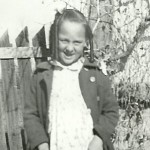 Years ago, when she was a child, Esther’s family lived in the country, and during the hard winter months, when the weather in Montana was as harsh and unpredictable as Wyoming’s weather seems to be this year, Esther was sent to stay with her big brother, Walt Schulenberg’s family during the school year, to ensure that she was able to make it to school each day. As a little girl, I suppose living in town with her 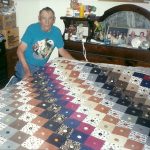 brother’s family seemed as far away from her parents, as the distance she is away from family now seems…especially for a little girl. Nevertheless, I’m sure it also seemed a little bit like a great adventure to her.

Esther has always been a crafty person. She makes quilts, curtains, and other sewing crafts. She is also an artist, and has painted everything from canvas to saw blades. Her favorite things to paint are landscapes, and that is cool, because that is my favorite paintings too. And were it not for Esther, my husband’s hair would look awful most of the time, because it was Esther who showed me how to cut it right…thankfully!! Today is Esther’s 76th birthday. Happy birthday Esther!! Have a great day!! We love you!!

One Response to Always A Big Deal