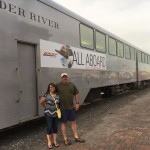 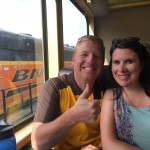 Yesterday in Casper, Wyoming, the Burlington Northern San Francisco Railway hosted a very special event. It was a train ride for the area’s first responders and their family’s. What an amazing thing to do for those people who are out there every day, often putting their lives on the line, to save those in need. My brother-in-law, Chris Hadlock is one of those first responders, as is his son-in-law, Jason Sawdon. Chris is a Lieutenant with the Casper Police Department and Jason is a patrolman with the Wyoming Highway Patrol, and I happen to know that they have been the first responders to some pretty awful crash scenes, and I hate to even think of some of the things they have seen. Nevertheless, when they show up at the scene, people feel comforted. Help has arrived, and they are glad.

The event, hosted by BNSF Railway, was to honor the police and fire departments in the city. These people the ones we count on to come to the rescue no matter what the situation, and many people would not be here today, were it not for those first responders. The train ride left from Casper, and went out just past the Dave 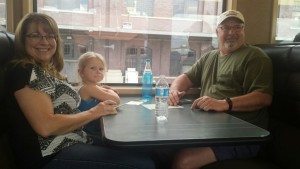 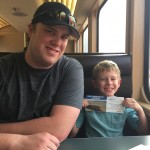 Johnston Power Plant outside of Glenrock. Chris and Jason were able to bring their family members on the trip, so my sister, Allyn Hadlock; niece, Jessi Sawdon; niece Kellie Hadlock; nephew Ryan Hadlock, his wife Chelsea and their children Ethan and Aurora all got to go along. Allyn told me that the passenger cars were beautiful and comfortable, and they had snacks like hot dogs, chips, and drinks. There was also a souvenier shop, so they all bought BNSF drinking cups. She told me that there were a total of at least 15 cars full of people, and they all had a wonderful time. For my niece Jessi, the trip held a special memory. Her grandpa, my dad, Allen Spencer used to take her out to see the Amtrak trains in Fort Morgan, Colorado, when she lived there as a child. He and her grandma, my mom, Collene Spencer would have loved this for sure.

“BNSF’s First Responder Express is a signature program recognizing the broad service and accomplishments of these very special community contributors.” according to Joe Faust, regional director of public affairs. I think it is an awesome way to honor a group of people who are so often overlooked until we need them that is, and 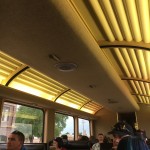 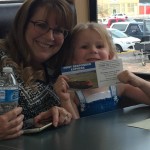 even then, many people almost look at them in the same way as they would a sales person…like it’s just a job. It really isn’t just a job. These people really care about helping others, and they are willing to put their life on the line to save the life of another person. I think the First Responder Express program is a wonderful thing for BNSF Railway to do, and I personally want to thank all the first responders for their service to their communities. And to our first responders, Chris Hadlock and Jason Sawdon…thank you both for all you do. Your service to this community is an amazing blessing. We love you both!!