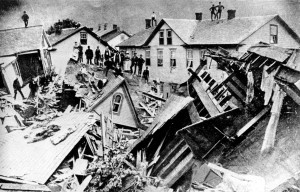 Over the years, man has tried many ways to harness water. Water is a necessity to life, and without it, all things would die off. Some projects worked out better than others, and some simply needed to be replaced sooner than they were in order to prevent disaster. A good example of that is the earthen dam. An earthen dam is a dam that is built out of rocks and dirt, instead of steel and concrete. Of course, when dams were first built, earthen dams were the only way to go, but after so many failed, a new type of dam had to be designed, in order to save lives. One such failure was the earthen dam built in 1840 on the Little Conemaugh River, fourteen miles upstream from Johnstown, Pennsylvania. Johnstown is sixty miles east of Pittsburgh, in a valley near the Allegheny, Little Conemaugh, and Stony Creek Rivers. The area lies in a floodplain that has had frequent disasters. This time would prove to be one of them. At nine hundred by seventy two feet, this dam was the largest earthen dam in the United States, creating the largest man-made lake at that time…Lake Conemaugh. At a time when here were no railroads in the area for transporting goods, the dam and its extensive canal system was the only way to transport goods to the people, but it became obsolete as the railroads replaced the canal as a means of transporting goods. The canal system was left to become a victim of the elements, and with its neglect, also came the neglect of the dam. In reality, people just didn’t really think anything would happen, and they most likely looked at the dam as just a part of the landscape. 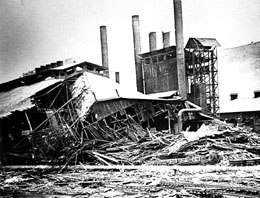 By 1889, Johnstown had grown to a population of 30,000 people, many of whom worked in the steel industry…ironically. On May 30, 1889, it began to rain, and continued steadily all day. No one really gave any thought the potential harm so much rain could bring to the nearly sixty year old earthen dam. The dam had a spillway, and so everything seemed safe, but the spillway became clogged with debris, that could not be dislodged. On May 31, 1889, an engineer at the dam saw the warning signs, but the only way to notify anyone was to ride his horse into the village of South Fork to warn the people…a ride that took an eternity in the face of the impending disaster. Nevertheless, it should have been enough time, but the telegraph lines were down, and no warning ever reached Johnstown. At 3:10pm, the dam collapsed with a roar that could be heard for miles. The water, moving at 40 miles per hour barreled down on the towns in it’s path, wiping out everything that got in its way. At Johnstown, 2,200 people lost their lives that day, including one Thomas Knox and his wife. Thomas, like a large number of the flood victims was never found. While I’m not sure that Thomas Knox is related to my husband, Bob Schulenberg’s family, it is quite likely that he is, as there are a number of Thomas Knox’s in the family…though none that I have found so far that died in the Johnstown Flood.

The people in the path of the raging flood waters, were tossed around, along with all that debris, including thirty three train engines that were pulled into the flood waters. I’m sure that for many, death did not come 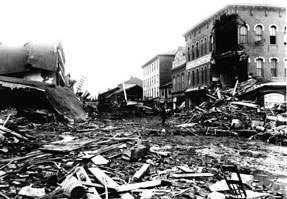 from drowning, but rather from blunt force trauma. Nevertheless, some people did manage to climb atop the debris, only to be burned alive when much of the debris caught fire, when it was caught in a bridge downstreem and burst into flames. There was a report of a baby that survived on the floor of a house that floated 75 miles downstream, but that was something that was not confirmed. It was during the Johnstown flood, that the American Red Cross handled its first major relief effort. Clara Barton arrived five days after the flood to lead the relief. In the end, it took five years to rebuild Johnstown, which went through disastrous floods in 1936 and 1977. I have to wonder if they should just move the town, but with no major floods since 1977, it’s hard to say.

4 Responses to The Johnstown Flood