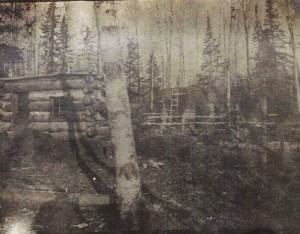 For a time, my grandfather, Allen Luther Spencer, worked in the lumber business. It started when he and my grandmother’s brother, Albert Schumacher, decided to go trapping in northern Minnesota. That venture didn’t go very well, and they just about froze to death. It was at that time that they decided to go into the lumber business. Being a lumberjack is no easy job, and was probably much more dangerous in my grandfather’s day, than it is now. Back then, lumberjacks, as they were called did everything from chopping down the trees, to cutting them with a saw, climbing up in the tree to get to the top. You name it, if it pertained to logging, they did it. They called it harvesting, and it begins with the lumberjack. The term lumberjack is not a term that is used much 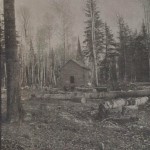 these days, because the modern way of harvesting is very different. Lumberjacks were pretty much a pre-1945 term. Hand tools were the harvest tools used, because there were no machines like what we have now.

The actual work of a lumberjack was difficult, dangerous, intermittent, low-paying, and primitive in living conditions, but the men built a traditional culture that celebrated strength, masculinity, confrontation with danger, and resistance to modernization. These days, there are a few people who actually celebrate the lumberjacking trade. Mostly it involves competitions, but just by watching, you can see that being a lumberjack was not a job for a weakling.

Lumberjacks, and their families, usually lived in a lumber camp, moving from site to site and the job moved. I 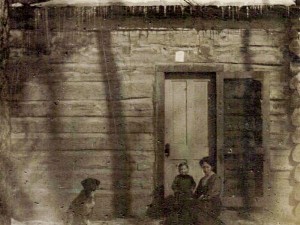 know that my grandmother and my Aunt Laura spent time in the lumber camps. From what I’ve been told, the houses were little more that a log tent. They didn’t stay very warm, because there were gaps in the walls, and my guess is that they could only use a certain amount of wood a day, so it didn’t eat into the profits. I suppose that the owner of the logging operation made a good profit, but that doesn’t mean that the people who worked for them made a great deal of money, because they really didn’t. Being a lumberjack was really a far from glamorous occupation, and like most really physical jobs, not one that a man can do for too many years. Before long, my grandfather, like most lumberjacks, moved on to other jobs, in grandpa’s case the railroad.