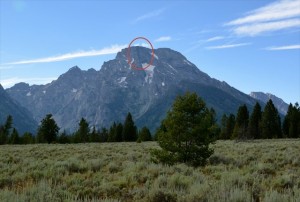 When I was about 10 years old or so, my family and my Uncle Bill’s family went to the Jackson, Wyoming area. While we were stopped at a lookout point for the Teton Mountains, my dad told a story, or maybe read the story about a plane that had crashed on Mount Moran on November 21, 1950. He told us that because of the difficulty in reaching the site, the plane and the remains of the 21 people lost in the crash were never removed from the site. My young mind could not seem to get past the fact that those bodies were still on that mountain top. I had a terrible time sleeping. I don’t know if I felt like we were somehow camping someplace we shouldn’t be, which was silly, because that site was miles from where we were camped. Nevertheless, it bothered me very much at that time. Now, many years later, I would know that the mountain was simply a burial place for the victims of a tragic crash.

While I am no longer haunted by the thought of those lost ones buried in the ice at the top of the mountain, I really never lost my curiosity about the crash and just who those people were. Then, a few weeks ago, I found that today would be the 65th anniversary of that crash. It seemed like it was time to find out more about it. The plane, a new Douglas DC-3, was owned by New Tribes Mission. It was on the first leg of a trip to South America. It left Chico, California and was bound for Billings, Montana. The last radio report in was over Idaho Falls, Idaho at 3:48pm. Then it was reported overdue at Billings, leaving the sinking feeling that something tragic had happened. A resort owner said he saw a burning fuselage in the flames far above timberline on the east face of Mount Moran. When the fire subsided, he could see nothing resembling a campfire, which might have indicated survivors. Gaining access to the site was going to prove extremely difficult, and with temperatures seriously low, the chance of anyone making it through that first night were next to none. Of course, you can guess the outcome of the crash. All those on board were lost.

Removing the wreckage and the bodies of the victims proved to be a very difficult, if not impossible task, and in the end, it was decided that the wreckage and the remains would be left on the mountain. The crash site is just north of the top of the handle of Skillet Glacier. Sometimes a glint of the wreckage can be seen to this day on a sunny summer afternoon when the light is just right. The crash site remains a resting place for those lost souls, and hikers who pass the site are expected to show their respect by leaving this mountain gravesite undisturbed. The site is the burial ground for the ten men, four women, and seven children who’s remains are still entombed in the wreckage. I suppose that these days, while the plane might have been left on the mountain, the remains of the victims would have most certainly been removed allowing the families to give them a proper burial. 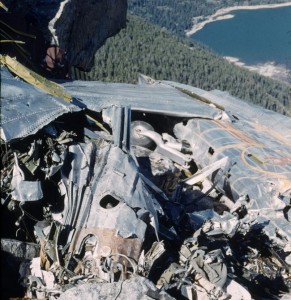 Hikers who have passed the wreckage have said that it has an eerie feeling. I’m sure it has to do with being so close to the remains of the victims of that horrible crash. I can totally relate to how they felt, because on that day, when we were camping just within sight of the mountain where the wreckage and the victims still remained, I could not sleep. I was not afraid of being haunted or anything silly like that, but rather I guess it felt like I was an intruder, much like the Native Americans felt when the White Man went through their burial grounds. It was just not the right place to be. I think I would feel even more like I was in the wrong place, if I ever hiked that mountain, and came upon that sight. I still have an eerie feeling about it to this day…or maybe it is just a sadness for those lost ones. I’m still not sure about that…to this day.

2 Responses to To This Day