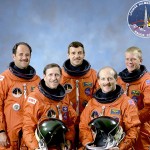 After a horrific accident such as Space Shuttle Challenger’s explosion 73 seconds after liftoff on January 28, 1986, taking with it seven astronauts, it is only prudent for NASA to have stopped all future flights until they knew the cause and had a fix in place. The Space Shuttle program was really NASA’s greatest achievement, and Challenger was its second shuttle into space. Challenger had a great record, having been sent into space nine times…before disaster struck on the tenth trip.

The Space Shuttle Challenger was first intended to be a test vehicle, Construction began in November of 1975. It was sent for testing on April 2, 1978, and after eleven months of vibration testing they decided to make it an actual vehicle. The first shuttle to be built into an actual workable unit was the Columbia, which ended up breaking up on February 1, 2003, to become the second time NASA lost lives in flight.

After Challenger blew up shortly after liftoff, NASA had to see what went wrong, and the space program was on hold for two years and eight months. Finally, after it was determined that an O-Ring failed due to weather that was too cold, a different NASA emerged. No longer would there be a rush to launch. Conditions would be right, or the launch would be scrubbed. It had to be that way. And yet we, as a nation, knew that America belonged in 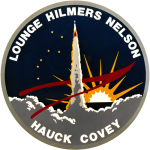 space. This was more that just a whim, but was rather an important contribution in many areas. The scientists who went into space performed experiments that led to many things we use today. Not to mention all of the information we have learned about our own little part of the universe. It was time to put America back in space.

So, on this day, September 29, 1988, NASA launched STS-26. It was the return to flight mission, and it was a success. The mission lasted four days, one hour, and eleven seconds, and traveled 1,680,000 miles, making 64 orbits around the Earth. The Shuttle that made the return to flight mission was the Discovery. On board were Frederick H Hauck, Richard O Covey, John M Lounge, Davis C Hilmers, and George D Nelson. I’m sure there were moments of anxiety, especially at the moment when the command to Go with Throttle Up, the very command that led to the explosion of the Challenger, was given. Nevertheless, these men went, and made it through that anxious moment, to have a successful mission. It was the first mission since STS-9 to use the original STS numbering system, the first to have all its crew members wear pressure suits for launch and landing since STS-4, and the first mission with bailout capacity since STS-4. STS-26 was also the first all-veteran crew mission since Apollo 11, with all of its crew members having flown at least one prior mission. I’m sure there were specific reason for each of those things, but my guess is that it was mainly to have all the best 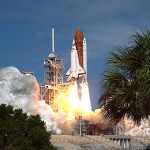 Besides conducting the mission’s various experiments, crew members practiced suiting up in new partial-pressure “launch-and-entry” flight suits, and also practiced the unstowing and attaching of the new crew escape system. On 2 October, the day before the mission ended, the five man crew paid tribute to the seven crew members lost in the Challenger disaster. Discovery landed on Runway 17 at Edwards Air Force Base, California, at 12:37 pm EDT on 3 October 1988, after a mission duration of four days, one hour and eleven seconds. Capsule Communicator Blaine Hammond Jr welcomed the crew, saying it was “a great ending to a new beginning.”