To Be Young Again 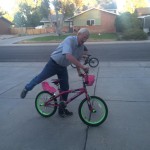 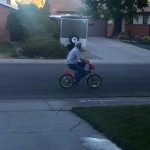 People may think that having children is a way of staying young, or reliving our childhood, but in reality, having children ages the parents. They go from being free from responsibility to being surrounded by responsibilities. Diapers, feedings, and lots of tears give way to school days, after school sports, and homework…which gives way to the terrible teens, dating, and driving. By the time they have graduated and moved out, you tend to feel either old, or overwhelmed at the thought of an empty nest, wondering where all the years have gone. Ok, those years weren’t that bad, but if all that happened in a short time, you would feel completely shell shocked. Being a parent is a big life change. Of course, all too soon, those years are over, and our children are grown up. Suddenly, when we are once again free from responsibility, we just don’t feel the same about it anymore.

Then, just as suddenly our kids bless us with grandchildren, and in the absence of the parental responsibility, we find out that it isn’t our kids that keep us young, but our grandkids. We find ourselves going outside and playing with the kids again, and not just pushing them in the swings. Sometimes we have to wonder what we were thinking. When we try to do cartwheels, or skateboard, or jumping on the trampoline, and realize that maybe we were being young, or maybe we were being foolish. When my grandkids were first getting cell phones, they brought me into the 21st century where a cell phone was not just for talking on, because if I wanted to staying touch with them, I had to text. It was the thing. Thankfully that wasn’t dangerous. Then came Facebook, which I originally got of to keep up with my teenaged grandchildren’s busy lives…I know, I know, my Facebook use has exploded from there…what can I say. The things we do for our grandkids…right. But then, I would do anything for them, and I think they know that. Basically, what I’m saying is that my grandchildren have kept me young. How amazing is that.

That is what my cousins, Terry and Shannon Limmer have found out too. With grandchildren from wagon to bicycle age, they have re-experienced all of those life events that kids go through. One day, Terry got the idea to see if he could still ride a bike. Supposedly, it’s something you never forget how to do, right. The biggest problem I 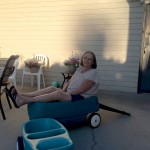 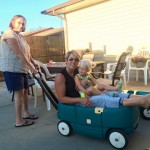 can see here is that Terry is pretty tall, and his granddaughter, Trinity’s bicycle is pretty little, since Trinity and her twin brother, Triston Patsie are just 9 years old. Nevertheless, Terry proved that he’s not old. He’s still got it, and that includes a bicycle that is far too little for his tall frame. Shannon also proves to the kids that she can still play, and she can either pull or be pulled in their wagon. Their play with the kids is that of adults going through a second childhood. It’s what we do for our grandchildren, because our grandchildren help us to be young again.