A Show Of Love

Each of us looks back on our life at one point or another, to reflect on all that has transpired, and the roads traveled to get to the point at which we have arrived. One of the things that often becomes the subject of such reflection, is just how we knew that our parents loved us. Sometimes people mistakenly talk about all the things their parents have given them. Of course, these people are usually teenagers, who have gone beyond the innocent understanding that love isn’t about things, but have not yet reached the point of adulthood, when they will understand that it is often the life lessons taught rather than the gifts received that they value the most.

In reading my Great Aunt Bertha Hallgren’s journal, I noted that one of the ways she felt the love her father had for her was that he made sure that they were in school, except when they were ill. Even though they lived further away than any of the other children at the school, their attendance was the best by far. The children were wrapped tightly in warm blankets for the journey on those cold North Dakota winter days, but they were in school nevertheless. Great Grandpa Carl Schumacher knew the importance of an education, and was determined that his children would have one. Whenever I hear of a student who wishes their parents wouldn’t make them go to school, I am reminded first that they are very young and naïve, and second that they will 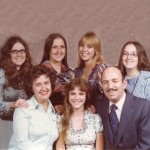 I know of many parents who have given their children a car and other such expensive gifts, and people seem to feel like they must love them very much. I suppose that could be true, but at the same time, the child has been cheated out of an important life lesson…earning the things you want. When my girls were preparing to drive, I told them that they would need a car, a driver’s license, gasoline, insurance, and a job to pay for all that. I suppose that there were people who saw that as mean on my part, but it is one of the life lessons that my girls look back on fondly. They never felt cheated, they felt empowered. That was the gift they were given, and to this day, they are both strong, capable women, who have raised their children in much the same way. I’m not saying anything against parents who did give their kids a car and such, but rather that this was the standard we chose to give our children. I’m also sure that parents who gave their children a car have taught them other life lessons that their children look back on when they reflect on the love their parents have for them. That is the privilege each parent has…to raise their children in the way that they see fit.

I look back on my own parents, and the standards they set for us, with a sense of pride, because they were great parents. We were never given a car…probably, that is why I did things as I did, but we were give much love, and guidance. We had chores to do, and we helped with cooking. We can all cook and keep house to this day too. We didn’t get to eat out all the time, so when we did, it was a special treat, but I never felt like that I 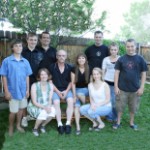 was cheated in any way. My parents showed their love in so many other ways. They raised us to be respectful, and as a result, respected. They showed us love, no matter what, and as a result, we know how to show love…no matter what. They showed us that just as God forgives us for our sins, we need to be forgiving of others and especially not to let the sun go down on your anger. They showed us unconditional love. We knew that nothing we did was going to lose us the love of our parents. Oddly, that made us try harder to do good…or maybe that was their plan all along. Looking back on those times makes me realize that the best way to show you love your child is to live it. Teach them values mixed with compassion, and they will try their hardest to live up to the standards you set for them. That is a real show of love.

3 Responses to A Show Of Love