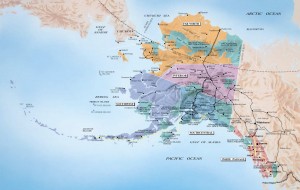 Until recently, I had never given much thought to historic events concerning Alaska. It wasn’t that I wasn’t interested, but rather that other places occupied my mind. Nevertheless, with the recent trip Bob and I took, Alaska has found a place in my mind and heart. Does that mean I have the Alaska Bug…well maybe, because if you offered me a free trip, I would be there with bells on. That said, I noticed the fact that today is a hugely significant day in Alaska’s history. Alaska became a state on December 7, 1959, the 50th state, Hawaii joined the union on August 21, 1959. It is very strange to think that it took almost 172 years to acquire all 50 states, and the final two joined within my lifetime. In our minds, we rather expect that all the states would have been within the first hundred years of each other, but such was not the case at all. Nevertheless, all but two states were within the first 125 years, with only the last two joining 47 years later.

Alaska was first discovered in 1741 when a Russian expedition led by a Danish navigator named Vitus Bering sighted the Alaskan mainland. Before long Russian hunters were making trips into Alaska, and their presence wreaked havoc on the Aleutian people, who had been relatively disease free prior to their exposure to foreign diseases. The first permanent Russian colony in Alaska was established on Kodiak Island in 1784 by Grigory Sheliknov. Settlements spread across the west coast of North America during the 19th century, with the southernmost fort located near Bodega Bay in California. By the 1820’s, the Russians were spending less and less time in the new world, and the British and Americans were allowed to trade in Alaska…after a few diplomatic conflicts. By the 1860s, Russia was nearly bankrupt, and so they decided to offer Alaska for sale to the United States, because they had expressed an interest earlier. The purchase took place on March 30, 1867 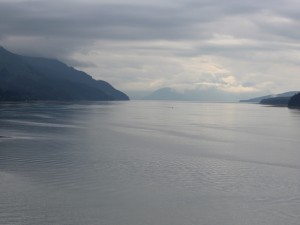 when Secretary of State William H Seward…I wondered where some of the names came from…signed the agreement and the United States purchased Alaska for 7.2 million…which was about two cents an acre…quite a deal really. Nevertheless, the purchase was ridiculed by Congress and the place was called “Seward’s Folly”, “Seward’s Icebox”, and President Andrew Johnson’s “polar bear garden” for some time. Still, the Senate ratified the purchase of this vast land that measured one fifth of the size of the continental United States.

Settlement of the new territory was very slow. It seemed that people didn’t feel comfortable about this cold, desolate wilderness, where the sun didn’t act like it did in the rest of their world. Nevertheless, all their apprehension was quickly forgotten with the discovery of gold in 1898. People moved to Alaska in droves to try to make their fortune. In my travels to Alaska, I had the opportunity to watch a movie about the Klondike Gold Rush. While people did find gold, it came at a heavy price, and many people paid the ultimate price. This land was an unforgiving place. Those who were not prepared for it’s harshness, soon found out what it took to live there, and not everyone could do so. It didn’t make them less manly, it just wasn’t for everyone…gold or no gold.

Still, those people who came to Alaska and felt an instant connection, knew in their hearts that this harsh, vast wilderness had somehow gotten into their blood. That is how Alaskans feel about their state to this day. Not everyone is cut out for it, and they do have a tendency to laugh and joke a bit about the light weights who go home, but they also understand that the ones who stay are a bit of a rare breed. In years gone by, we would have called them Mountain Men, and I suppose that fits the early Alaskan people, but by the same token, they would not have made it either, had it not been for the wisdom of the Aleutian people concerning their health. There weren’t all kinds of things like antibiotics, and immune system boosters then. And fruits and such were not plentiful either. But the Aleutian people knew of ways to get vitamin C and other things to prevent disease. 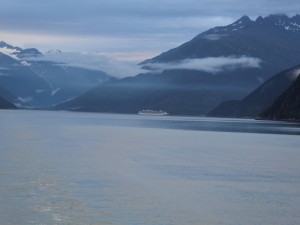 Even so, at that time, people did not stay permanently in Alaska. They summered there. Many people still do. They just don’t like the winters there. And yet, if you look, there are areas of Alaska…along the coast, like Anchorage that is actually warmer than places like Chicago. Of course, the interior just doesn’t fall into the warm category, with temperatures reported as low as -65° is some places. I think I might want to get out of there for the winter too. Nevertheless, Alaska is an amazing state, and one that I would love to visit again. Not only is it big in size, but everything there seems huge. The mountains are amazing, and the glaciers awe inspiring. If you ever get the chance to visit our 49th state, it is a trip you will never forget…believe me.