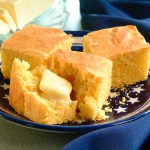 2 Responses to A Melt In Your Mouth Flavor