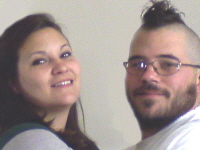 For many years, I had lost contact with my cousin, Greg’s daughter, Stephanie. She was always such a sweet little girl, so it saddened me that most of the family didn’t get to know her as an adult. Then Facebook came along. I have been so blessed to re-connect with so many family members, near and far away.  A while back Stephanie, who lives in South Carolina, talked her dad into getting a Facebook page so they could keep in touch better. It was that request that connected me with Greg, and subsequently with Stephanie and her husband, Michael. It is a reunion that I feel blessed to have been granted.

I have very much enjoyed getting to know Stephanie and Michael, who are both fun loving and easy going people. As with any new relationship, there was a…tense moment, when I thought we might be having a tiff, only to find out that like me, they enjoy a good debate, and simply don’t take offense at differences of opinion. Now those are my kind of people.

Stephanie and Michael have two wonderful children, Kathleen (Katie) and Michael III (Will), who are as cute as they can be, and the apple of their grandpa’s eye. His only wish would be that he could see them more often, but since he lives in Idaho and they are in South Carolina, that isn’t easy. Enter Facebook again…and so many people think Facebook is a waste of time. I just don’t agree, and I doubt Greg does either. 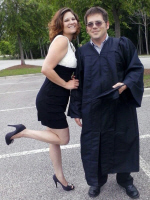 A while back, Michael went back to school to earn his degree. His family stood behind him in his journey, and as he said, “I love you and thank you for being there no matter what. Kathleen and Will thank yall for constantly reminding me that every thing isn’t always so serious and sometimes I just need to take a step back, make a silly face, and have a good laugh.” Good advise if you ask me, and it seems to have worked. Michael graduated from Trident Technical College on May 3, 2013.

It looks like this little family is on their way to amazingly good times ahead. And it’s not like the past was anything bad either. Today is Stephanie and Michael’s 10th Wedding Anniversary. Happy Anniversary to two wonderful people!! Have a great day, and may you have many more anniversaries in your future!!

4 Responses to Make A Silly Face