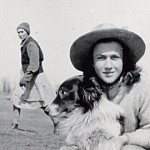 2 Responses to Don’t Mess With Mom