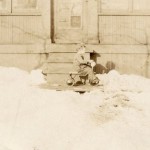 Living in Wisconsin, my Uncle Bill was no stranger to snow. In reality, it was a fact of life from the time he was a little boy. I’m sure that some winters were worse than others, which is the case in any area that gets snow, but those winters when the area got lots of snow, seemed to cause particular problems for Uncle Bill. I’m sure everyone thinks that lots of snow causes problems for everyone, and I would have to agree, but for Uncle Bill, it was a depressing event to a degree.

At least in his younger days, my uncle loved to be outdoors, and traveling, in particular, was very enjoyable to him. In the letters my dad wrote home to him from World War II, Dad mentioned that Uncle Bill was thinking of going to Mexico…of course, there was a job involved in that one, but Mexico would have also been a way to get out of the snow and warm up too, and since the letter was written in February, it’s my guess that Uncle Bill was, true enough, worried about the shipyards closing, but also, and maybe more importantly, feeling the cold winter weather pretty deeply too.

As a little boy, Uncle Bill had run across snow problems when he found himself sitting on the front walk of the family home, looking at the deep snow that was making it impossible for him to any further on his tricycle. The look on his face told me that this was not a happy little boy, and who could blame him. Tricycles are for riding on, not sitting on with the inability to move. And unfortunately for Uncle Bill, his tricycle was not the only place he found himself in just such a fix. It seems his car ended up snowed in as well, which we all 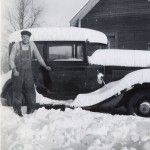 know can be frustrating. The biggest difference between the tricycle and the car is the fact that with the car, Uncle Bill was still able to smile about the whole situation, where with the tricycle, he looked quite annoyed.

Winter’s snow can be lots of fun for everyone, or at least those who like winter and snow, but it also has the irritating ability to slow traffic, mess with travel plans, and make the use of certain toys impossible. For those who live in areas that get lots of snow, it can be particularly annoying, as was the case for Uncle Bill, whose plans always seemed to be foiled by the dumping of large amounts of snow, right on top of his world. It seemed he was always getting snowed in again in those days.