When he first arrived on September 9, 1998, 5 weeks early, Josh had to be flown to Denver because his lungs were under-developed. That was just about the last time Josh would be weak in any way. Josh quickly grew into an eating machine, wanting a treat every time he walked into my house. The first words out of his mouth were, “Treat, Grandma…treat!!” I had to make sure I had granola bars or fruit roll-ups, because that boy was hungry!!! And the really strange thing is that to this day, he can eat and eat, and still be a skinny little kid. Today, Josh is a great big 14 year old boy, but he’s still slim. I don’t know how he does it, but he does! 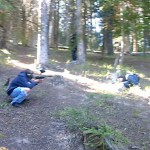 We went up on the mountain yesterday to celebrate Josh and his dad, my son-in-law, Kevin’s birthday. They wanted to have their party on the mountain. They love to camp, and so Josh couldn’t think of a better way to celebrate his birthday. They have had a great weekend, and in the middle of it, they got to spend time at their favorite pass time…paintball shooting. And to top it off, we brought them another fighter…Caalab!! Kevin, Chris, Caalab, and Josh had a great time hiding and shooting each other. And as for me, I was just glad that I wasn’t involved in the fighting, because I have a feeling I would have not only lost badly, but I’m pretty sure I would have been the prime target, if I know these guys…and I do. 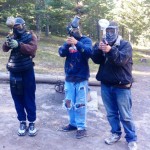 So much has changed since our premature little Josh arrived, but one thing I can tell you without a doubt is that Josh is a fighter. In the beginning he fought for life, in sports he fights to win, as the youngest he fight for equality, and in paintball, he fights to beat his dad, brother, cousin, and anyone else who wants to take a shot at him. True, all his fighting is in the area of sports these days, but as the youngest, I suspect he will be vying for his superiority for a while yet…not that any of the boys or Kevin will mind that so much. They are a competitive bunch, after all. Who will come out the victor over all lies in the future, but that’s ok. The journey will be fun. Happy birthday Josh!! We love you!!