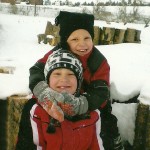 As far as my nephew, Tucker is concerned, his big brother is the greatest friend ever. Riley is 11 years old and Tucker is 4 years old. To a little boy of 4, a brother who is all grown up like his big brother Riley…well, he is just the coolest person ever. Tucker and Riley live out in the country, and while Tucker has a couple of friends who live close enough to play sometimes and spend the night together once a week, Riley remains Tuckers closest friend and his hero big brother. And when Riley is staying at a friend’s house, Tucker really misses him a lot. It’s very hard for a little boy to understand why is big brother gets to go do so much, and he has to stay at home a lot more. He just wants to be big…like his brother. Seven years difference in age can make such a big difference in what is allowed and what isn’t.

When Riley is at home, he plays with Tucker quite a bit, so Tucker feels that loneliness a lot when Riley is away. And for a little guy, a weekend can easily seem like forever. I’m sure Tucker wonders why his brother doesn’t stay home with him more, but as we all know, the older a kid gets, the more friends they usually have, and they would much rather hang out with their friends than their little brother. Even if they do like playing with their little brother too.

But, when Riley is home, and it’s a snowy day…well that’s when the fun really begins. The boys get to go out side and do all the things boys really like on a snowy day. They could throw snowballs, or build a fort, or go for a sled ride, or build a snowman. It doesn’t really matter what they are doing, a snowy day is one of the best days for a kid, and for Tucker that kind of day is only made better by being able to spend it with his big brother, Riley.

Time will change things, of course, and Tucker will go to school and have more friends. He won’t always feel so lonely when his brother is playing with his own friends or at work, or college. Still, no matter where they are, or what they are doing, Riley will always be Tucker’s big brother, and…I think his hero too. There is just nothing like an older sibling who has been there for you. And someday, maybe Riley will look at Tucker, and think, “Hey, maybe you’re my hero too!”