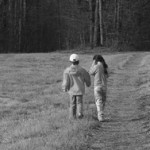 I came across an old friend on Facebook today…one for whom I had been searching a very long time. It was a relief really, to finally find her. Even though I am still waiting for her to respond to my friend request, I feel like I have to write a little bit about what a wonderful person she was…and what a great family she had. Very rarely could a friend spend the night and have the sisters and the friends get along too, but that is what Gale, her sisters, Lynne, Lea Ann, Michelle, and I did. When I would spend the night at her house, Gale, her sisters and I would have so much fun. They lived out in the country, and actually had two houses. The main house, and the little house where all the girls slept. It was an unusual arrangement, I know, but the girls were all old enough for it to work, and all were good girls.

They had, as I recall, chickens, pigs, cows, and horses on their little farm, and I would help out with the chores when I was there…something I found fun and interesting, but I’m sure that Gale and her sisters would disagree with me on that one. We would ride horses, and lots of other fun things that I couldn’t do living in town, so going to Gale’s family’s place was always a favorite thing to do in my book. I do remember a couple of bad things too…well not real bad, but I remember a time that Gale was riding a horse, and she was heading back into the coral, and the horse was in a hurry I guess, so he got a little too close to the fence, and ran Gale’s leg into the fence. I don’t recall if it bled or not, but it wasn’t broken. I just remember being real scared for my friend right then. Another thing that happened was that one of the cows was in a hurry to eat, and he stepped on my foot trying to get into the barn. Good thing it was a calf and the area was a little muddy. My foot sank into the mud and wasn’t hurt to badly. I don’t even think I ever told Gale that it happened, but I sure remember it. Not my last encounter with a hungry cow, as those who have read my blog for a while can attest. I seem to have a knack for being in the wrong place at the wrong time where cows are concerned. It’s probably best that I don’t spend time around them anymore, lol.

The evenings in the little house were probably the most fun, however. We would watch movies and eat popcorn, and when we would hear the phone ring, then the real fun would begin. You see they had a party line. Now I’m sure most of you don’t even know what that is, but they were somewhat common back then. A party line is when several families share the same line. The odd thing about this is that you can pick up the phone during a conversation…provided you can do it quietly…and listen in on the conversation. And that is exactly what we did. Sometimes it was pretty boring, but sometimes you would hear a boyfriend/girlfriend conversation, and then…well, it could get interesting. After a while, we couldn’t stop laughing, and that would end the eavesdropping for that call. The people talking would start yelling at us to get off…right now!!! And so we did, but we laughed about it the rest of the night. I’ll never forget the great fun I had with Gale and I can’t wait to re-connect with her and her family again…hopefully soon.