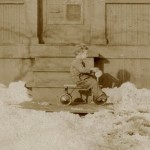 Winter can be a long, dreary time…especially for a young boy. And winter around the Great Lakes Region has a tendency to last longer than some other areas. That is the region that my dad and his brother and sisters grew up in. Now, while winter is an ok time of year for a kid, it can limit some of the activities that young boys are most interested in.

When a boy is three or so, and they have a tricycle, their whole world is about being mobile, and the deep snow that you get in the area of the Great Lakes…well, lets just say that a tricycle doesn’t go too well. My Uncle Bill was always an adventurous boy. I remember him and my dad talking about their antics, from the time they were little until they left home. Let’s just say that sitting still was not a phrase that spent much time in their vocabulary, and since Uncle Bill was two years older than my dad, my guess is that at least in the early days, he took the lead on what the day would hold for them.

When he was three, however, Uncle Bill was pretty much on his own for fun, and the winter time put him stuck with nothing to do, and anyone who has had a child stuck at the house, with nothing to do, knows how bored they can get. So, after fussing repeatedly at his mom, begging to go outside, I can imagine that she finally gave in and he hauled his tricycle outside hoping to be able to ride, only to find that sitting on it was going to be as far as he would go. Knowing my Uncle Bill, I’m sure, and if you look at the picture, you can see that this was depressing to him. What comes to my mind is that he is thinking…”when will Spring get here.”

Sometimes, you don’t really know the story behind a picture, but if you look closely you can picture the scene in your head, or see something in their eyes that tells the story. And while I don’t remember my grandmother, who died when I was two, I can imagine that she must have seen something in this scene that prompted her to take this picture. My guess is that she saw just about the same thing I did…a boy viewing the snow is disgust, because he knew that there was no way his little tricycle could move through it, so he sat there, thinking of the coming spring, and wishing it would hurry up.