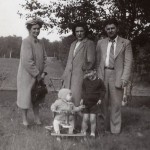 There is a lot to be said for the way a little brother looks up to his big brother. I know my dad looked up to his brother, and as you can see, my cousin Denny thought the world of his brother, my cousin Gene. Gene was always a gentle soul, and at least whenever I saw him, a quiet man. His sons Tim and Shawn remind me of him in many ways. I suppose that with his brother, and his own boys, there were times when he could be rough and tumble and plenty noisy. And maybe, it is that I was quite a bit younger than he was, so he was almost more like a uncle, than a cousin. I always liked him very much.

From looking at these pictures, it is easy to see that Gene was pretty happy with his little brother too. That is pretty typical with brothers. And, also typical of brothers, I have been told these brothers would get into their share of mischief…like taking things apart and not being able to get them back together…something that seems pretty common with boys…much to the irritation of their mothers sometimes, but as most mothers of boys will tell you, it comes with the territory. And as I understand it, the practice of taking things apart and putting them back together, has moved on to at least one of Gene’s sons, Tim who likes to repair iphones that meet with an unfortunate mishap…probably a good skill to have, since the repairs would likely be expensive otherwise.

I think for a big brother who loves his little brother, the worst time of the day is nap time for the little brother. All you can think about is that you have no one to play with, and of course your mother has told you that you must be quiet so you don’t wake up the baby. 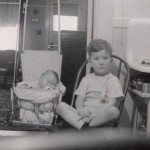 So, you sit quietly beside your little brother, hoping that somehow he will hear your thoughts and wake up, so you can play. There is just a look in Gene’s eyes in this picture that shows me a mixture of love for his brother, and frustration that his brother is sleeping. I suppose the picture taking was a way to get his mind off of the situation that he disliked so much…having to sit quietly and wait. And while his brother obviously was too little to play, there is a type of play that a big brother can do that can be very satisfying for both children…making the baby laugh. It is something that is so pleasing to everyone…young and old alike, that even though babies can’t physically play, they can be very entertaining.

One Response to Big Brother