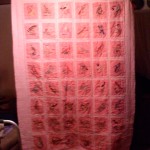 Years ago, before Alaska and Hawaii became states, my mother and father-in-law decided to purchase a quilt pattern for the then, 48 United States of America. The pattern was was for the state birds for each of the 48 states. They thought it would be a wonderful addition to their home.

When it arrived, she was excited about it, and went to right work on it. She always liked that sort of thing. She used to knit, crochet, embroider and sew. Of course, with 3 children and later, 4, 5, and 6 children, time to spend embroidering things that weren’t necessary to the running of a household, or clothing the children…well, it was just scarce. So she worked to embroider the squares whenever there was time in her busy day, but gradually there was less and less time for such things, so it became a long project.

It was a different time and place then. 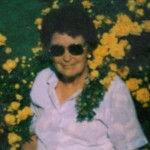 You didn’t have dishwashers, and many people grew large vegetable gardens and canned or froze their food, and since that is very time consuming, the quilt squares took a good amount of time to finish…not to mention the fact that embroidery is a very meticulous art…one I never had the patience for. Anyway, I’m sure you can imagine, time was something she had precious little of, with cooking and cleaning, canning vegetables, and clothing 6 children. So, over the years the squares were finished, but as often happens in with these projects, life got in the way, and they were packed away with the intent of someday turning them into a quilt…a plan that wouldn’t materialize for over 20 years and of course, the addition of 2 more states.

One day, their daughter Debbie came across the squares and decided to have the work finished. Her 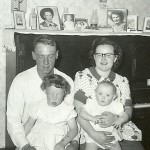 mother-in-law quilted, so she spoke to Cleo, and she agreed to put the quilt together so it could be returned to my mother and father-in-law as a surprise. And a wonderful surprise it was. They were thrilled to have it, even if it had taken so many years.

Again, like often happens, the quilt was packed away for safe keeping, and thought to be lost…until recently when Debbie was helping them go through some things and came across it. Which is how we once again have a little piece of history…the quilt of the 48 United States of America.