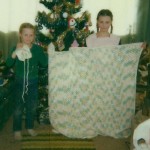 In 1984, when my girls were 9 and 8 years old, they were excited to be getting a new cousin. Back then, you didn’t get to know what the baby was, so we all just had to wait. My girls were just learning to crochet, and they wanted to make something for their new cousin. So, we decided on Corrie making a blanket, and Amy making a bonnet. They picked out the yarn, a variegated mix if pastel green, yellow, pink, and white, so it would work whether it was a boy or a girl.

The girls worked very hard on their little projects. I was quite proud of their dedication. As the time grew near for the baby to arrive, it was decided that the gifts would be a Christmas present, since the baby was due in early December, and they lived in Pueblo, Colorado, and would not be up to Casper until Christmastime.

On December 8, 1984, Jessica Lynn arrived. It was a day my girls were very excited about. They now knew who they were making their gifts for. It renewed their excitement about the gifts they were working on. With their excitement, my own grew. I could picture the surprised look on my sister and brother-in-law’s faces when they opened the gifts. Christmas couldn’t come fast enough that year. 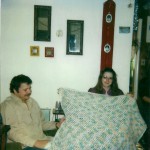 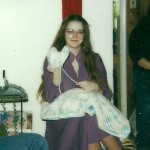 Finally the long awaited day arrived. They could hardly contain themselves. When my sister opened the packages, everyone was thrilled, and my girls were so pleased. The bonnet looked so cute on Jessi, and the blanket was a perfect match. It was a wonderful ending to an exciting story. My girls had set a goal for themselves, and worked very hard to reach their goal. And reach it they did…beautifully!!